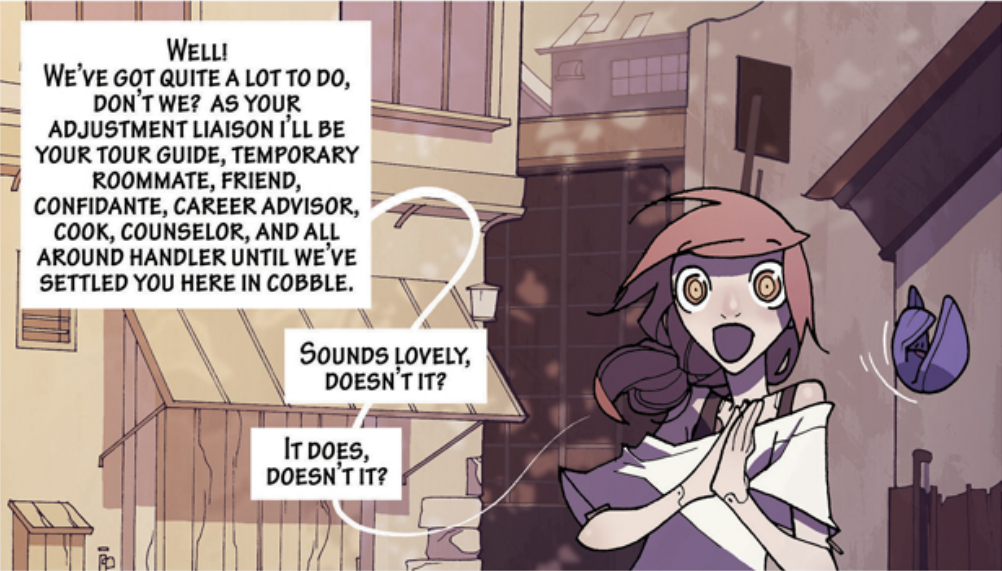 Although Hinges began as a web comic, I was not familiar with the story prior to reading this book. What attracted me to this book was the interesting cover and interesting art style. The decompressed storytelling style has been in vogue for about ten years now. While many different writers (such as Brian Michael Bendis) in the commercial world are responsible for spearheading the idea at the idea at the big publishers, two different trends have lead to readers becoming familiar with the idea: manga and webcomics. Manga, beginning its tradition much in the same was as cheap pulps in the USA had a need for a great number of pages. Web comics, of course, can have infinite page counts because it’s taking place in an electronic medium. Of course, much of what makes web comics so innovative makes them hard to transition to paper. Often various compromises have to be made. And, of of course, the decompressed story telling means that those discovering the story for the first time on paper may find that at the end of the book, nothing much has happened.

Of course, it’s always odd to read a story or comic and say that nothing happened. For if nothing happened, the book would really only be a sentence long. Instead it’s more accurate to say that at the end of Hinges Book 1, we barely know more than we did when we started reading. But quite a lot has actually happened. And we’ve also been exposed to a pretty interesting universe.

It’s often said that those in charge are puppet masters. In this world it appears to literally be true. Just a few pages into the book we meet Senior Orderly Margo. She appears to be a marionette-style puppet. What kind of world has a need for puppets in charge? And who is controlling the puppets? Is it some kind of computer or is someone actually behind the actions?

The story also deals with the idea of self-determination. In this town, which we find out is called Cobble, each person is given a list of possible jobs and then applies with the various masters in town to be able to undertake those jobs. Our main character, Oreo, is amazing at sewing, but since that’s not on the list, it’s not a job she can pursue. Her adjustment officer tries to help her get an appeal, but when that is rejected, she is stuck trying to fit in with her list of jobs. In fact, near the end of the book she’s told by a marionette, “I just have a hard time bleieving that you’re suited for a job that hasn’t been pre-approved for you and this is a system that has worked for us…pretty  much forever.”

Also adding to the idea of self-determination is the fact that, in a flashback, we see Oreo hanging with other marionettes. It is her bauble a weird cat-like being, who knocks into her and drops her onto the floor where Margo finds her. While reading this book, this just filled me with so many questions. What were the extra marionettes for? Why were they not being used? What does it mean that her bauble caused her to be seen as a non-marionette? Is that why she has such a hard time fitting in? Was she made for some other purpose?

Speaking of her bauble, through a bunch of flashbacks we learn he stole the Oreo pendant (which is why Margo names our main character Oreo) from a couple and was fleeing when he fell through the roof and dropped her out of the rafters. He spends nearly the entire book causing problems for Oreo and attempting to steal the pendant. Eventually Oreo defends him from some creature and he appears ready to stay with her for a while. I have a feeling Bauble will be the clue to what’s going on in this world.

The boldest choice for author Meredith McClaren is that Oreo does not speak at all until page 106 of 111. As an avid player of Japanese RPGs in the 1990s I’m quite familiar with the idea of the silent protagonist, but it’s certainly a lot more rare in comics than it is in the video games. It does speak to McClaren’s great artistic abilities that she’s able to convey so much through facial expression and body movement that we can have the main character silent for nearly the entire book and never be in doubt about how Oreo feel about what’s happening around her. (With the exception of when she first wakes up)

One of the things I’ve enjoyed the most about exploring the indie publishers has been discovering books that push the boundaries of the medium. Hinges Book 1 certainly succeeds in that aspect.

Hinges Book 1 by Meredith McClaren. Buy it through this link to help support Comic POW! :Hinges Book One: Clockwork City