The Dissolution of Peace: East of West Vol 3 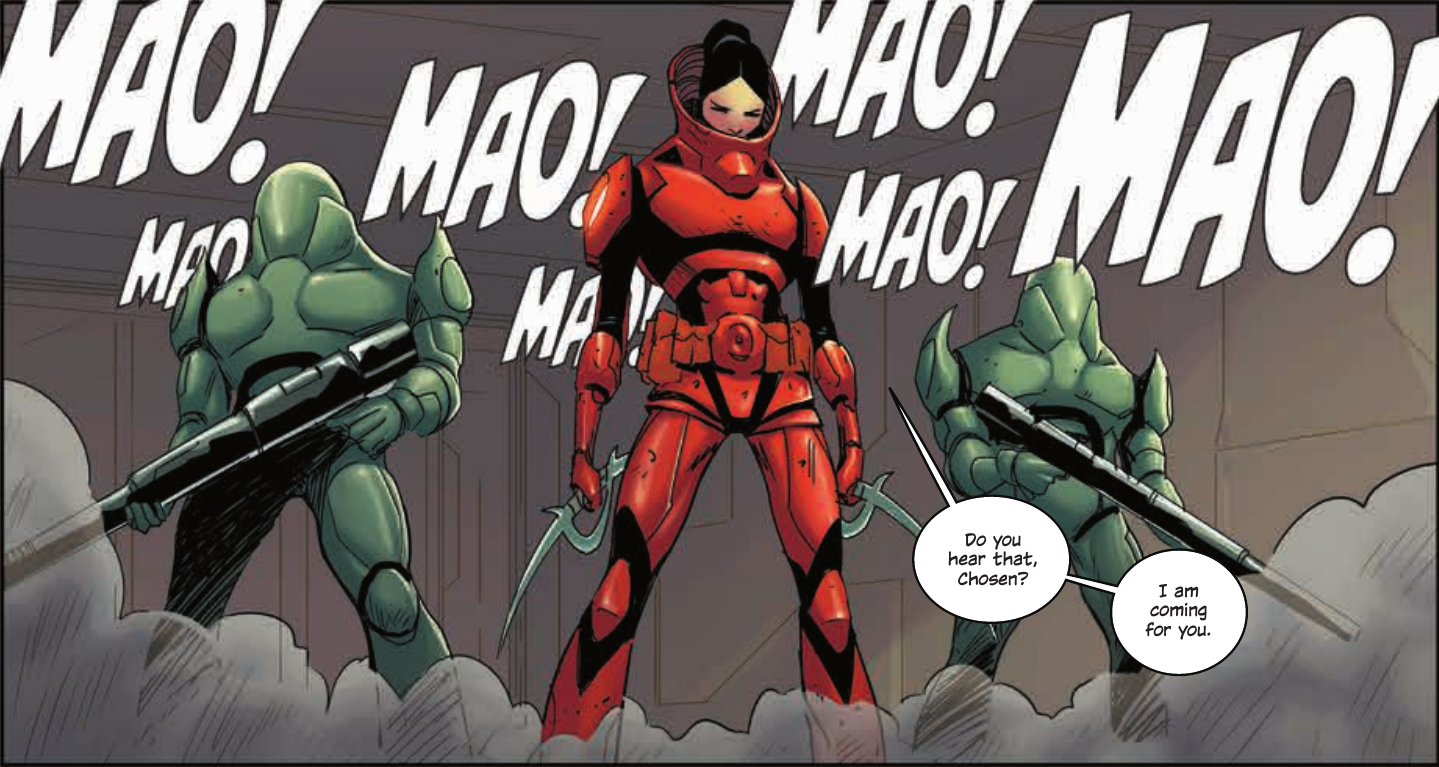 Last time we considered Hickman’s use of the themes of love, family, and fatherhood as well as introducing the world, plot, and art. The title of this third trade is “There is No Us” and on the surface, it is about the dissolution of the tenuous peace between the Seven Nations North America. But the deeper themes of this volume are that of free will vs predestination and deception.

The first two issues of this volume overlap with the twelve issues I examined last time, but I will include their plot elements as I provide a quick overview of the plot. Xiaolian calls a conference of the Seven Nations at the neutral territory of Armistice. Finally in a position of power, she seeks revenge on The Chosen for kidnapping the son she had with Death. As I mentioned before, many of the Seven Nations are not run by The Chosen (although they hold positions of power) and so they attempt to avert war. A situation I will detail momentarily leads to Xiaolian getting the war she wants. The Ranger finally finds his target and kills Cheveyo. After a confrontation with Death, he agrees to take Death to the facility housing The Beast (his son). The Three Horesemen decide they’re sick of following along with The Word and will go kill The Beast. They leave Ezra in a crumbling Armistice building and head to the facility housing The Beast. As I mentioned last time, The Beast has been plotting his escape with his computing device. He defeats the Conquest and affirms his dominance. He renames himself Babylon, names his computer Balloon and the book ends on a huge “OH SHIT” moment.

Beginning with the idea of free will, we have Bel Solomon who is literally fighting for control of his actions. In his confrontation with The Chosen, he was possessed by Cheveyo. During the chaos of the meeting of the Seven Nations, Cheveyo takes control of Bel and forces him to shoot a member of The Endless Nation, tipping the balance towards the war Xiaolian wanted.

The long-suffering Ezra Orion is a monster specifically because The Word required him to do so. As the foremost expert in The Word, he knew his sacrifice was necessary so he is beside himself when War decides he’s going to go off script and kill The Beast. He flippantly comments that if they’re wrong, they’ll do it correctly the next time they resurrect. Although there are three of them and they have greater experience, The Beast defeats them as he must. Conquest, who loses his foot during the confrontation realizes they cannot thwart fate, “We were wrong. He is the Beast. He is the Message. He is… our Master”

Yet Hickman throws us a suggestion that perhaps all is not simply foretold. As I mentioned last time, instead of simply educating The Beast, Balloon has been plotting his escape. The Beast asks Balloon what the odds are of success. Balloon mentions that out of tens of thousands of simulations, The Beast has a 2% chance of failure. So is The Word predestined or is it simply the most likely course? Can chaos throw it off like psychohistory in Asimov’s Foundation series? I have a feeling this theme will continue to grow in importance as we move into Year 2 of the apocalypse.

Moving on to the deception theme, there’s a combination of personal deception and nation-state deception. The former is more treacherous than the latter as it’s a foregone conclusion that nations do not trust each other. Starting with the meeting that opens this book, it appears that The Union wants war and wants to make sure Xiaolian is painted as the aggressor. Doma Lux has her delegate swallow a bomb. It’s unclear to me whether The Confederacy was in on it or Chamberlain was just taking advantage of a chaotic moment, but he uses a poison ring to kill his president. I wouldn’t be surprised if he was working with The Union on this point because now both countries are led by member of The Chosen. It’s also likely that was was needed for the apocalypse to continue because one of The Endless Nation begins to reveal that the deaths didn’t happen as others think they did when Cheveyo controls Bel to shoot him.

Of course, we learn both through events and dialogue in this book and companion book The World that The Endless Nation, with their advanced technology, has been the major supplier of weapons to the other nations. Of course, they kept back the best weapons for themselves while denying they were doing so. Xiaolian reveals her father’s realpolitik smarts in realizing this was the case and creating his own secret weapons. For even if The Endless Nation hadn’t been holding back, they still know the weaknesses of all the weapons they have created.

Finally, the the final reveal we learn that Balloon is deceiving Babylon. This will certainly end up causing no end of grief to Death, Xiaolian or both. The major question is who Balloon is working for. After completing the book and taking some time to digest what happened, I realized that a member of The Endless nation arrives with a similar computer as Balloon. It just wasn’t clear in the previous volumes that they were the same tech because Babylon’s was connected to the environment in a different manner. So does this mean The Endless Nation is controlling Babylon? Or is it just a coincidence because all advanced tech comes from The Endless Nation. Or has Balloon’s sentience (or seeming sentience) caused him to act on his own (or in concert with other AIs) to use Babylon for his own purposes? Or is this just the way it needs to be for Babylon to play his role as The Beast? So many questions from that one little reveal at the end.

While family played a smaller role in this section of the story, I expect it may increase once again soon if and when Death finds Babylon. I’m also expecting the free will concept to grow as we move forward. All the characters here are charlatans so I expect deception will play a role, but the question is whether members of The Chosen will betray each other, especially if the apocalypse turns out to be worse than they wanted and others get cold feel like Bel Solomon. It’s easy to forget that The Ranger is after them, so they could end up suspecting each other of treachery if he kills a few without getting caught or revealed. We’ll see where Hickman has gone the next time we cover East of West.

I’d love to discuss what you thought of these themes or any themes I forgot to mention – please speak up in the coments.