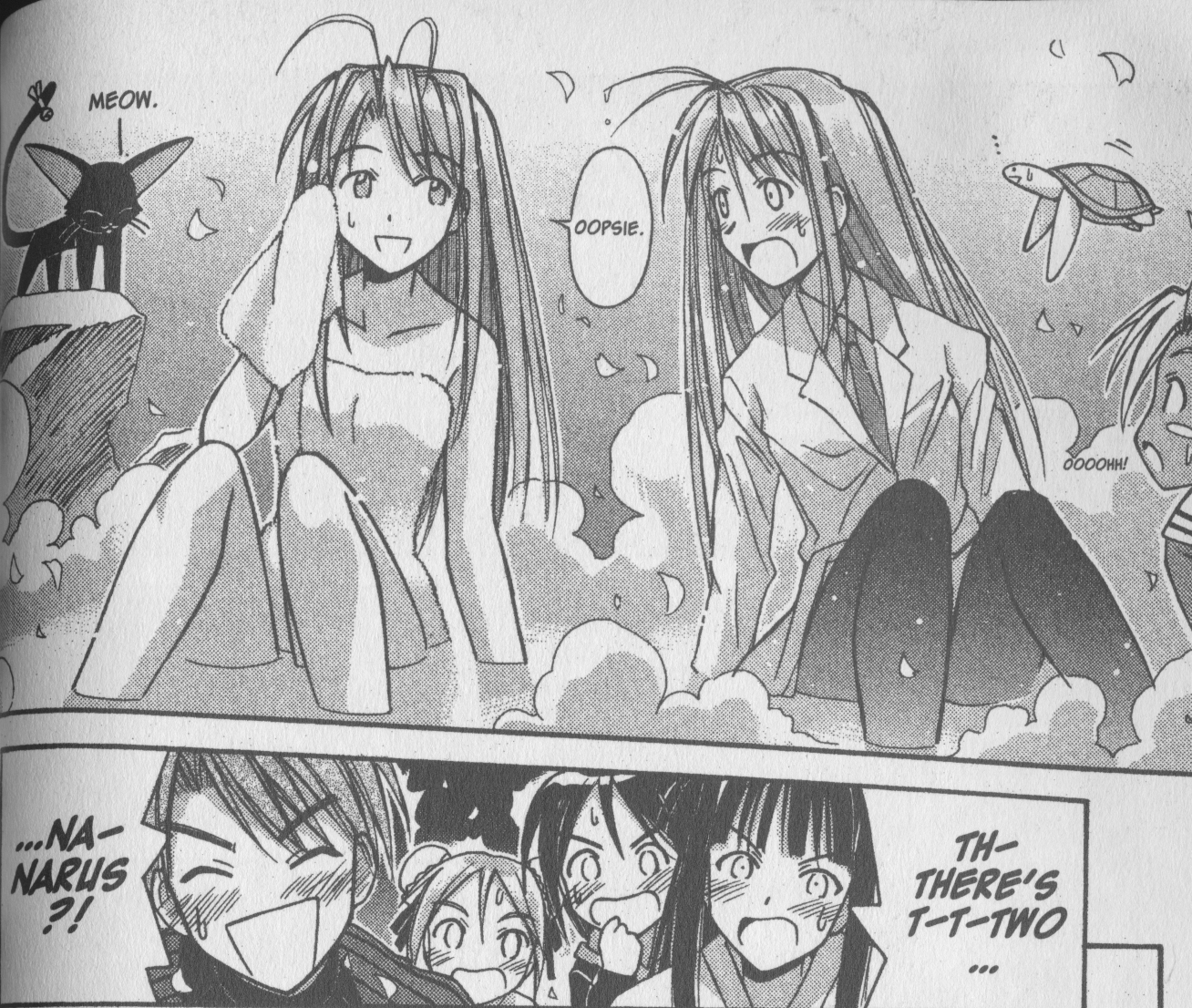 The story picks up where we left off before. Keitaro is going to go overseas with Seta to do some archeological work. The first story is a light story dealing with the Naru keeping Keitaro company while he waits at the airport for a delayed flight. Their relationship continues to thaw as Keitaro continues to gain respect for growing up and being less of a loser (at least by the standards shown in this book).

The second story appears to have Naru going temporarily crazy (perhaps because she misses Keitaro) which allows for some girl/girl sexual fan service. Actually, it’s Keitaro’s sister Kanako who has an uncanny ability for impersonating people. Through a combination of masks and changing her voice, she’s able to pretend to be anyone. She turns the dorm back into an Inn. (Which is what Keitaro thought it was when he first took over as the manager) The girls don’t just roll over and accept this. They constantly battle Kanako for control of the inn/dorm. While the fan service and constant wondering whether the person speaking is genuine or Kanako gets tedious pretty quickly, there is one redeeming quality to this chunk of the book. Kanako treats the girls the way they treated Keitaro when he first started: she gives them lots of work, they have to bathe in the tub instead of hot springs. In the middle of a ridiculous book, it’s an emotional anchor as some of the girls realize how unfairly they treated Keitaro in the beginning. In the remaining books Naru will continue to pound Keitaro whether or not he deserves it (as before he often doesn’t) but she gets a taste of her own medicine from Kanako and she is a little more aware of what she does to Keitaro going forward.

When Keitaro is leaving, the Motoko makes him a strips of paper to ward off evil. While I’m certain the Japanese are not the only culture that assigns a special significance to the putting fortunes into writing, it is certainly a large portion of the culture. It finds its expression in three different forms and, from the translation, I’m not sure exactly which is being referenced in this book. The most unlikely type in this instance (but which we have seen in other volumes of Love Hina) is the O-mikuji. These are the are the fortunes Japanese get from Shinto and Buddhist temples which we usually see during the festival issues of manga. These are random fortunes (leading to comedy, tragedy, and drama when necessary in Japanese stories) so not quite the same as what’s taking place here. However, it does bring to mind that at the same festivals there is the writing and tying of fortunes that demonstrates again the power of writing fortunes. Closer to what’s happening here are the Ofuda and Omamori which contain inscriptions or the names of kami which bring luck.

In the scene above Kanako’s masquerading as Naru pushes the comic to a pretty dark place. (Especially when Motoko later complains about what was done to her) Other scenes with Kanako pretending to be Naru in this book once again demonstrates the tension in Japanese culture between being comfortable enough being nude in public baths and speaking frankly about breasts and so on on the one hand and crossing the line into violating personal space and touching/grabbing. While it’s not surprising to find that the Japanese don’t like their personal space invaded (it’s probably pretty close to being a universal human feeling), we certainly have less opportunity for that in the US as we have less public spaces where we are nude together. Interestingly, I have recently learned that it wasn’t that far in the past when Europeans/the West would see public restrooms as a place for conversation and gossip as there were not any walls dividing the stalls.

Well, that concludes book 11. This one and the next one are a bit more thin on culture and sex and gender norms as the story is wrapping up and so there aren’t as many new elements being introduced.