Is Wayward the new Buffy? 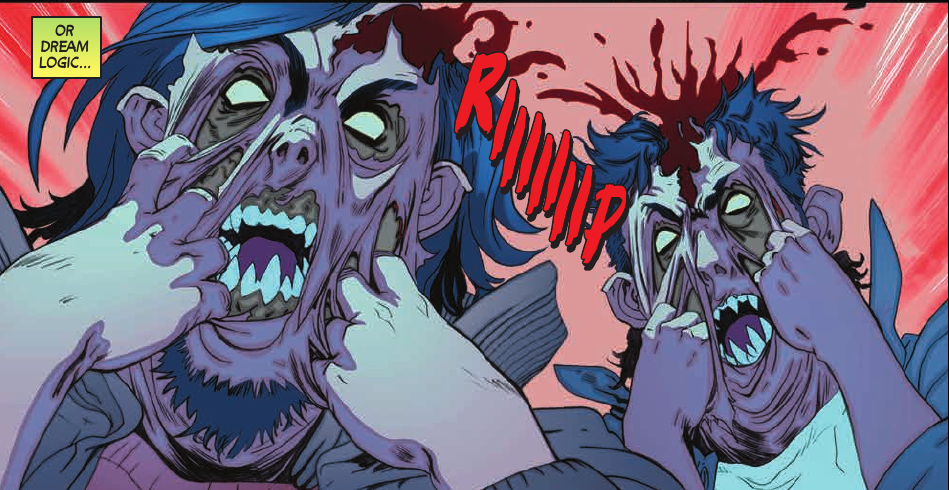 Back in April 2014 I mentioned that Image had a new series coming out and the subject line for the press release was: “The perfect new series for wayward Buffy fans.” I’ve made my way through the first five issues and it’s a good time to see if the comparison was apt.

There are quite a few ways in which it is accurate. Our main character, Rori Lane, is a high school girl who is living with her divorced mother. She just transferred to a new school and new city (technically a whole new country). Her mother has no idea what she’s up to. She’s fighting demons – Japanese demons instead of vampires. She meets up with a few other high school students and they’re working together.

I can see where Image Comics marketing thought, “Hmm, I think we can see some overlap with Buffy fans.” But Wayward is not just Buffy in Japan. That could be interesting on its own, but would probably also seem a bit too derivative. So it’s great that the above paragraph is where the similarities end.

Jim Zub starts off with one very important change. In Buffy the titular character is the only one in the Scooby Gang with powers. Everyone else brings something to the table, but she’s singular in her abilities. Every Watcher quickly finds his Slayer overtaking him and he goes from a trainer to more of a minder and mentor. By contrast, in Wayward each of the four main characters has special powers.

In fact, Rori’s powers are arguably the least useful (as demonstrated so far) and the definitely the least flashy. So far we’ve seen that she can see some lifeforce thing (we later find out it’s a thread spun by “weavers”) that reminds me of a cross between what Donny Darko sees and what Batman can see in Batman: Arkham Assylum. She can also spell stuff in Japanese like “calm” and that makes people get calm. We need to see what the limits are before we know how powerful this will truly be. Meanwhile, Ayane can turn into cats (like Dracula turning into bats) and fight as viciously as a cat. Shirai eats spirits and gains powers from doing so. Nikaido, the newest member, can make everyone around him fall asleep if he’s overwhelmed. (Or even cause an explosion if he’s really overwhelmed) While Buffy was a natural pick for the leader with her skills plus a combination of hardheadedness and Giles helping her develop true leadership skills, there’s no real reason to have Rori lead. In fact, Rori tries to stay away from leading, but they pick her simply because she seems to be the most organized at the moment. It’ll be interesting to see whether Zub has her grown into the role such that it becomes unquestioned or whether this causes tension within the group later.

Thus far the series is still introducing the world and the concepts; although as of issue five we have what they called the big bad in Buffy. Even as Zub brings us the main plot, there are lots of other things he has hinted at that will continue to provide us with lots of opportunity for character growth and mini-plot points. On a minor level, Ayane has a strange way of speaking with Rori’s mom that hints that perhaps she’s not human. And Rori’s mom was seen working at a place that seemed like a cross between Buffy’s Initiative and Final Fantasy 6’s esper program. While it can be fun to see how each author treats vampires (for example American Vampire), it’s lots of fun to have Japanese mythology bad guys. For most of us outside of Japan that really means the sky’s the limit when it comes to what to expect from the enemies and potential allies.

Outside the story and comparisons to Buffy there are some other great elements worth talking about. First of all, at the end of each issue there is an explanation of either the supernatural characters featured in that issue or an aspect of Japanese culture featured in the issue. For those of us who haven’t lived in Japan it provides an understanding of Zub’s jumping off point for the story and lets us know that, for example, when Rori’s teacher tells her to dye her hair black so that it doesn’t make the other kids want to have “punk” colors it is something that happens in Japan. That issue’s information said that even not having the exact right shade of black hair can lead to the student being asked to dye their hair.

Second, the art in Wayward is truly art. Steve Cummings’ line art is great in so many ways. He plays with angles in a cinematic way. I know that has become somewhat of a dirty term recently among comic fans, but with Cummings he is not trying to shoehorn a comic into a movie’s visual vocabulary. Instead he is taking the best from cinema and manga and gives us a greater variety of viewing angles than is often seen in American comics. From cinema his framing helps us feel constrained or that a character is isolated. From manga comes his focus on the small things like removing a coat or grasping hands or the ever present cat in the foreground shot. Of course, with all the special effects that represent the supernatural powers, Cummings’ line art is paired well with John Rauch and Tamra Bonvillain’s colors. They make the world pop and make the supernatural truly seem out of this world.

Well, to come back around to the question this article’s title poses, Is Wayward the new Buffy? It depends on how reductionist you want to get. While it certainly shares lots of similarities with its WB/CW spiritual ancestor, it brings enough new material to the table to be its own separate thing. I’d make the following recommendation: if you enjoyed Buffy, you should check out Wayward. Just don’t expect Buffy in Japan. If you never got into Buffy or thought it was OK, I’d still recommend Wayward as its got its own feel. And if you hated Buffy, well, it all depends on what you hated about it – because we still have a female high school person fighting demonic forces. As for me, this is one comic I’m going to be making sure I make time to read. And for someone without a lot of free time, I can’t think of better praise.

Discussions welcomed in the comments!

update 21 Jan: Between the time this article was written and published, Image announced that Wayward will be collected in a trade. Here are the details:

Wayword written by Jim Zub with line art by Steve Cummings and colors by John Rauch and Tamra Bonvillain.

One thought on “Is Wayward the new Buffy?”