Exploring Reality (and other themes) in Joe the Barbarian 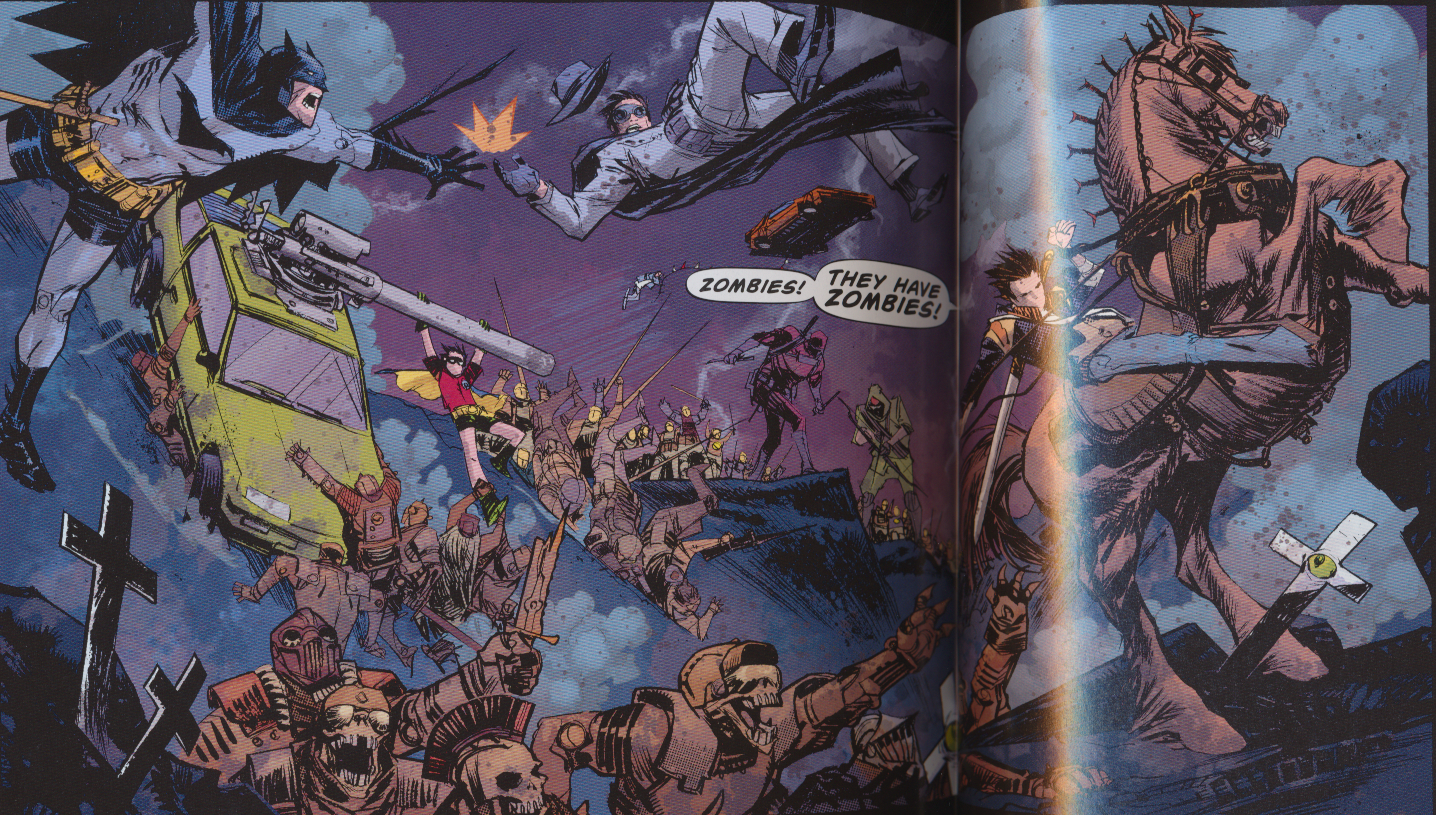 Grant Morrison can be a tough read. His comics are almost always filled with metaphors, allusions, references, and Easter eggs. Sometimes this works masterfully like his run on Batman and Robin Vol 1. Sometimes it falls flat like his run on Action Comics Vol 2. Other times, like his run on Batman Vol 1 or Batman Inc Vols 1 and 2, it contains individual stories that are great, but fails to achieve a cohesive whole. I feel that Joe the Barbarian has most of Morrison’s best attributes and only a few of his weaknesses.

The story centers around a boy with diabetes who begins to hallucinate when he goes into hypoglycemic shock. He hallucinates another dimension in which he is The Chosen One. The description of the book asks “But is his quest really just an insulin deprived delirium—from which he can die if he doesn’t take his meds—or something much bigger?” For nearly the entire story the answer seems a simple “no”. The dimension he’s in is populated by his toys and it’s affected by things he does in the real world.

But there are two panels that imply perhaps things are a bit more complicated than that. A panel with the coward monks has them able to see Joe and comment that the barrier between the worlds was lowered. Joe is not cognizant of what happened here, making it less likely to be part of his hallucination. A second panel late in the narrative has Joe, ZYXY, and the Giant Dwarf appear in his house for a frame. The giant remarks, “did you just see that?” but no one responds to him.

Hallucination is a recurrent theme in Grant Morrison’s work. In Batman Inc Vol 1 he re-imagines a trippy Silver Age Batman and Batwoman story to be a villain-induced acid trip. During The Black Glove story arc, Morrison re-imagines Bat-Mite as a hallucination rather than an imp as he was in the Silver Age comics. Grant Morrison has written and spoken in interviews about his fascination with the idea that hallucinogens may open a path to another experience or inaccessible knowledge.

This, of course, is the foundation of the mystic traditions that involve shamans going into a trance or ingesting hallucinogens to gain access to the realm or knowledge of the gods. A clue that this may be what Morrison is alluding to involves Joe’s rat telling him to look him up (in that world) next time he hallucinates.  Additionally, he’s given a series of clues while hallucinating that leads to him finding a letter his father had written before going off to war that included the deed to the house (he and his mom are in danger of losing it). Whether the reader chooses to believe that the hallucinatory state is allowing Joe to access (perhaps through astral projection or perhaps literally appearing within and without) the other reality or whether it just opens up his mind to receive wisdom, either interpretation is a valid reason for the end of the book. One of Morrison’s inspirations for this story was Alice in Wonderland and both are about characters who hallucinate entering another world (if Disney’s version is accurate – I haven’t yet read the original) and come out having learned and matured.

Morrison also deals with the themes of identity through three different characters: Joe, his rat (Jack), and the Giant Dwarf (Smoot). Again this isn’t foreign territory for Morrison. His Damian Wayne struggles with what it means to go from being the son of an assassin queen to being a crime fighter. His Superman in Action Comics Vol 2 struggles with what it means to be a hero who is feared and hated.

Going in order, Joe best demonstrates the aspect of Joe the Barbarian that was inspired by The Hobbit/Lord of the Rings. Both of Tolkien’s works deal with the reluctant hero. Joe knows he’s not a hero and he “knows” he’s just hallucinating. But within Hypogea, he is The Dying Boy. Interestingly, while a very “chosen one” type of name, it’s also a description of his actual condition. Like many a reluctant hero, he spends the beginning of the story denying he’s worthy of being a hero, yet by the end of the story he has taken on the mantle of hero. His journey is authentic and he works to earn his new identity.

Jack, on the other hand, begins the story with the assumed identity of a warrior. He is dressed like one and is therefore able to convince Joe and others to follow his order or fight alongside him. It is revealed to be an assumed identity. His brothers are warriors, he is just a juggler. His assumption of a false identity causes a crisis of identity during the climactic battle. How can someone pretending to be a warrior succeed against actual warriors? He chooses to own the identity he previously has worn as a mask and is willing to fight to the death if necessary because that’s what a warrior would do.

Smoot has the most tragic identity issues until the end of his arc. He is a Giant Dwarf and is therefore often rendered clumsy by a world built for people smaller than him. His father is embarrassed with him and continues to hope Smoot will die in battle. It’s his main motivation in sending Smoot on the quest with Jack and Joe. Yet, when Smoot leaves the dwarf world, he finds out that he may be a considered a giant by his own kind, but he’s merely normal human size. He has lost his identity. Before he may have been clumsy and cowardly, but at least he was a giant. Now he was simply a clumsy coward – nothing special about that. Until he’s told at the end to act like the giant he’s always assumed he is, he is without purpose and conviction.

Morrison also explores cowardice through two separate groups in Joe the Barbarian. One is the sect of monks that have taken a vow of cowardice. Officially this provides them cover from having to partake in the conflict – they wouldn’t want to break their vows; after all, vows are sacred things.  On the other hand, Queen Bree chooses the cowardly path of staying out of the fight in order to preserve her kingdom. Everyone else might die, but at least her kingdom would remain. Of course, it’s only a slight prolonging of death because they are on battery power and the batteries are fading. Each of these groups provides examples of legitimate reasons to abstain from combat even though it may lead to a greater evil prevailing. After all, what greater duty does a monarch have than to save the people under their rule? Yet, by failing to help others, they doom themselves. And the monk’s vows do nothing to hold the enemy forces at bay. Simply explaining the vows of cowardice does nothing to solve the problem.

Given how richly Grant Morrison often layers his narratives there are probably many other themes and issues that have slipped past me. I’d love to discuss them in the comments below.

Joe the Barbarian by Grant Morrison with art by Sean Murphy, colors by Dave Stewart, and letters by Todd Klein. Buy it on Amazon (and help support this site)