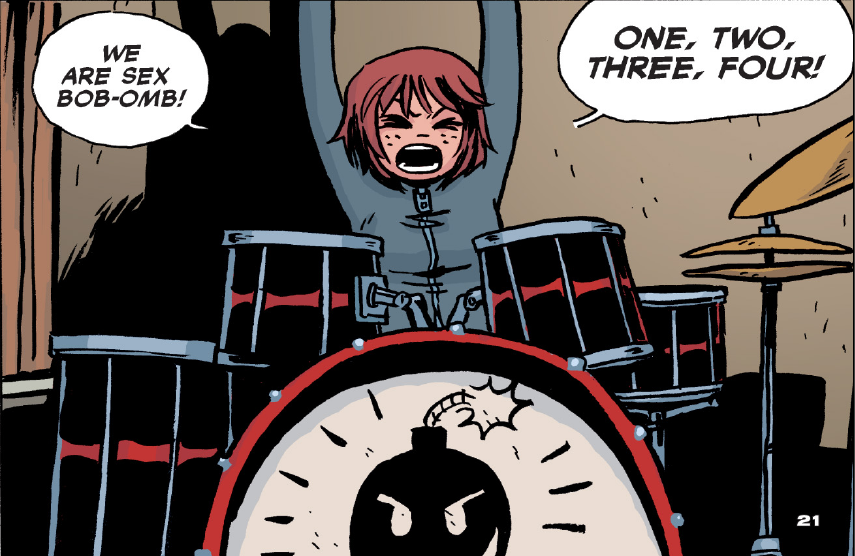 I read Scott Pilgrim in its original manga-sized, black and white form when it first came out. With the final volume of the color version coming out this year, I thought it would be a great time to revisit the story as well as looking at how the addition of color changes things. I’ll be exploring the story and themes volume by volume.

I’d like to start by taking a look at how the conversion to color has affected the story-telling. Scott Pilgrim is an example of manga coming full circle. Osamu Tezuka, the originator of manga, was originally inspired by early Walt Disney. In turn, my generation has been influenced by manga as we create our comics. The original volumes went with manga’s small-size and black and white “coloring” both for authenticity reasons and for practical reasons – coloring and color printing is expensive. In a CBR interview O’Malley says, “Initially, I was resistant to color because the books were always intended for black and white. That was part of the manga aesthetic I was going for.” But manga-inspiration is not the only reason for black and white in comics. Robert Kirkman has stated that Walking Dead wouldn’t have the same impact as it does if it were in color. It’s better for the mind to fill in the gory details. In a strange way, even though O’Malley’s art is already manga-cartoony, the colored version definitely feels less “real” to me. With my look into East of West I spent some time talking about how colors can affect the mood of a book and how Hickman has two very different color schemes in East of West and Manhattan Projects. So I feel as though the colors in this version somewhat rob some of the reality from this admittedly fantastical story.

The only other time I found the story to be affected by the change to color was in this scene. Look at the white out scene in the original comic:

O’Malley beautifully uses the fact that he has a black and white comic to have the white of the snow swallow up more and more of the page until we just have text bubbles and a door. Here’s the same page in the color comic:

Because of the color, especially the fact that both the snow on the ground and the door are blueish, it just doesn’t have quite the same artistic effect or even psychological effect that your comic is swallowing itself up.

Overall, it doesn’t ruin Scott Pilgrim’s Precious Little Life – not by a long shot, but it does show how some things don’t quite survive adaptations.

Moving on to themes, the biggest theme of the series in general, and Scott Pilgrim’s Precious Little Life in particular, is the theme of extended adolescence. Scott and his friends are in their mid twenties, but they aren’t working. They’re just acting like they’re still in college or high school and focusing on a band that doesn’t seem to have any prospects of becoming a source of income. It’s one of the many ways (we’ll see some more in a bit) that this series speaks to my generation. In fact, I’m just about the same age as Scott Pilgrim. And many in my generation ended up in this stage of extended adolescence – sometimes by choice and the way we were raised. Sometimes because the economy screwed us over and it was either that or be homeless. While his life doesn’t match up to mine, I have many friends that ended up in a similar boat.

But Scott Pilgrim, the character, isn’t just extending his adolescence by living like he’s still in college, Scott Pilgrim is also dating a girl in high school! Back when I was in high school I knew plenty of girls who dated guys in college. But, the ones whose parents cared about such things would ask them “why would a man want to date a girl?” Inevitably, those were the girls who were first to lose their virginities. (Because they wanted to – or so they often claimed) Yet this isn’t Scott Pilgrim’s motivation – some girl that’ll be so awestruck by dating a man that she’ll give it up.

He is so stuck in his adolescence that he’s not even having a real adult relationship. He’s content to just hold hands and hear about her kiddie problems. He hasn’t even attempted to kiss her. In fact, when grilled by his friends about just why it is that he’s doing this he responds that he just wants a simpler relationship – without the baggage of an adult relationship.

Unfortunately for Knives Chau, for reasons that aren’t fully explained until way later in the series – Scott Pilgrim is a jerk. Even though he wants the simplicity of dating a girl from high school, he doesn’t want to be embarrassed by her. So when he brings her to band practice, he tells her “You have to be good” which causes her to have a mini-crisis – why doesn’t her awesome, adult boyfriend think she’s normally well-behaved? And he also doesn’t man up and break up with Knives when he starts getting into a relationship with Ramona. This leaves Knives with a pretty crappy reaction to her first kiss.

And while there are men who philander, it doesn’t make the actions any less childish for Scott to be dating two women at once simply because he does not have the will to break up with Knives. That’s immature behavior that really should be shed before someone leaves high school. Even though Wallace tells him to do it, he does not by the end of this volume.

Given that one of the two biggest themes of the series is immaturity and the lack of growth on the part of many of the main characters it’s interesting that Knives who starts off the most immature and dazzled simply because Scott’s in a band (even if it’s a bad one), turns out to mature the most. At least that’s my recollection. We’ll revisit this point at the end.

Of course, the other gigantic theme of this series (the one that everyone knows even if they’re only heard about Scott Pilgrim) is that of dealing with the past – which actually ties in with the theme above because it takes a lot of maturity to deal with your past. I remember with Scott Pilgrim this has to do with NegaScott (another Gen Y reference) and that also has to do with why he’s such a jerk and wildly inconsistent. (He tells Wallace he doesn’t drink, but we saw him drinking the night before at the party. In a later book he can’t remember his birthday) The more famous way O’Malley investigates this in the series is through Ramona’s Seven Evil Exes.

While the delayed maturity is specific to Gen Y (in bigger numbers than Gen X – the so-called Slacker Generation or the previous generations) it’s still not something all of us in Gen Y experienced. But dealing with the ghosts of  your partner’s relationships is something almost all of us (no matter what generation) have dealt with – sometimes even multiple times. Sometimes it’s physically manifested in for form of STDs. Other times it’s psychological – a previous partner was nicer or meaner or scarred the other person in some way. Sometimes it’s an unfair comparison to how the ex was in bed. And sometimes it’s the irrational jealousy of others who’ve been there first. Of course, that robs people of their agency and person-hood before they met you, but I’ve seen more than one argument in media and in real life over a partner’s ex-partners and how many times they’ve slept with someone or given/received oral sex. Most of these are unfair or just held in our heads and one can get over them if they want to. Others may require professional help, but they all must be overcome.

So O’Malley makes the Exes manifest by needing to actually be physically defeated. I had forgotten that Ramona’s first Ex, Matthew Patel, was from Middle School. O’Malley does a lot with this. He reveals the capriciousness of middle school relationships because Ramona simply dated Patel because it would be the opposite of what all the other girls would do and would piss off the jocks who thought they had a right to her. At the same time, O’Malley is relating how ridiculous some people can go with the whole “how many people did you date?” taking it back to middle school which is going back a decade for Scott. Finally, O’Malley is also exploring the guy who can’t let go of his girlfriend. I think everyone feels this to a small degree – I know it always felt awkward when I saw an ex with someone else. But Ramona’s evil exes take it to the extreme where they’re willing to fight anyone she later dates – even based on a middle school relationship.

A minor theme in the series is a nonchalant attitude to the existence of, and relationships with, gay people. Again, a high mark of Gen Y – in polling we (and our little siblings in  Gen Z) don’t really care if someone’s gay. It’s just another personal attribute like enjoying mountain climbing. Unless Canada has the stereotype of gay men heckling bands, there doesn’t seem to be anything about Wallace that marks him as gay. In fact, most of the reason we know is because Scott introduces him as gay (due to his NegaScott cluelessness, no doubt). In fact, the most hilarious way for O’Malley to show that no one seems to care or feel irrational fear is that Scott Pilgrim actually literally sleeps with Wallace because he’s too poor to afford another bed. In fact, in this volume, he sleeps with Ramona in the same way – bringing an absurd equality to the entire arrangement. There appears to be some sort of either fluidity of sexuality in O’Malley’s work or Wallace is helping out those in denial because at the club Stacy (Scott’s sister) sees Wallace kissing the guy she brought and exclaims, “You’re not stealing ANOTHER guy from me!”

I’d like to finish up this look at Scott Pilgrim’s Precious Little Life by looking at two quick topics. What made me like the series from the first time I read the first page when my brother lent me the black and white version was the constant love letter to Gen X/Y. We were the first generation to grow up on Nintendo. We think in memes and video games and references and this spoke to me. I don’t have too much to say about this, but I’d like to leave a list of some of my favorite references.

Finally, things I noticed on this re-read – Gideon is mentioned on page 93 and 106. Before I didn’t notice the letter from him under her lamp because it didn’t really mean anything to me until later in the series.

What do you think about these themes? Did you find others or do you want to discuss these? I’d love to discuss them in the comments!

Scott Pilgrim’s Precious Little Life by Bryan O’Malley with colors by Nathan Fairbairn. Get it on Amazon and support this site or  get it digitally at Comixology or from Oni Press.