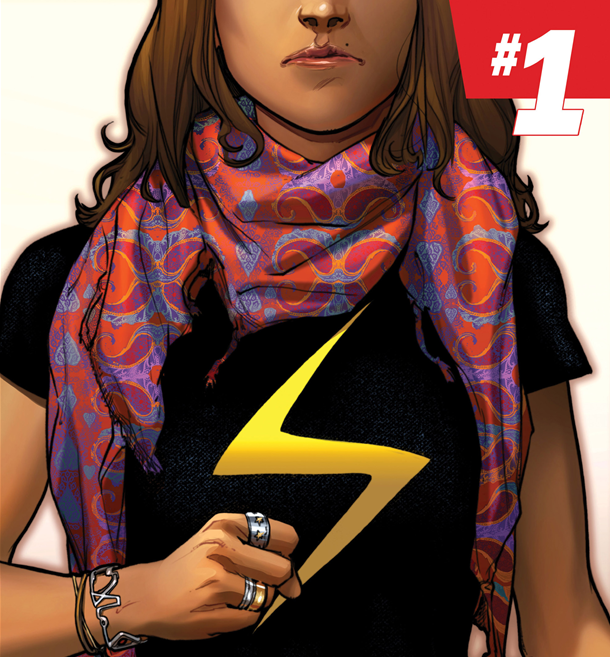 In 1962 Marvel Comics changed the face of the comic industry by creating Spider-Man. Peter Parker was a teenager who wasn’t stuck in the role of sidekick. He was able to be the hero of his own story and he managed to do it while balancing the struggles and drama of teenage life. Over the years from the X-Men to the Young Avengers, Marvel has continued making dynamic teen heroes that struggle to come of age against the backdrop of superhero life. The most recent addition is Kamala Khan, a young Muslim girl trying to find her place among her peers in New Jersey while taking up the mantle of Ms. Marvel.

This title has already drawn a massive amount of attention because it’s the first time a Muslim character is headlining their own book at Marvel. Now, just to be clear, Kamala is not the first Muslim hero at Marvel. She’s not even the first Muslim heroine, but creating a title around her and giving her a beloved legacy title is an extremely important step toward diversifying comics and broadening representation.

Introducing new characters is always hard, but introducing minority characters is even harder. There is always push back from fans who don’t understand the value of diverse representation as well as high expectations from supporters. In the past too many minority characters have suffered from tokenism or were walking stereotypes instead of complex characters whose diversity contributes to their character instead of dominating it. One way to make sure that representation is authentic and well-rounded is to hire women and minority writers, authors, and editors and in the case of Ms. Marvel, Marvel has done just that. Writer G. Willow Wilson, is a Muslim woman and the editor of the series Sana Amanat is as well. In fact the series was originally conceived by Amanat, based on her experiences growing up. Their contributions should bring an authenticity to the series that might otherwise be missing.

The secret to crafting a good character of any background is to make them relatable to everyone and the real strength of Ms. Marvel #1 is how likable and relatable Kamala is. She is a sweet girl who in many ways reflects the teenagers and nostalgic adults that Marvel is hoping to bring to the title. Like all great teenage characters Kamala is trying to figure out who she is and who she wants to be. She’s an internet savvy girl who lives a comfortable life, but dreams of something more. She struggles to find her place with her peers and her family, but doesn’t lack for people that care about her. Those qualities transcend gender, race, and religious identity and should appeal to comic readers at large.

The first issue makes it clear that Kamala’s religion will play a role in the story and it attempts to give a wide representation of Islam by showing several different characters with several different approaches to their religion. The story opens with Kamala at a corner store before school. She’s with her friend Nakia who is wearing a headscarf when a few of her classmates come in and make some ignorant comments. They express concern that Nakia is being forced to wear it and Nakia explains that it was her decision and that her father would actually prefer her not to.

Also in this issue we encounter Aamir, a member of Kamala’s family, who is very committed to praying regularly as well as not taking certain jobs that he considers to be against his religion. Kamala’s father argues with him because he is unimpressed by long periods of time spent praying and works at a bank much Aamir’s disapproval. Kamala herself seems to keep the dietary rules, but doesn’t wear a headscarf. When she is tricked into drinking alcohol at a party she immediately spits it out for religious reasons.

More pressing to Kamala is her father’s overprotectiveness which isn’t so much about religion as it is about gender and how fathers attempt to protect their daughters in ways that they don’t worry about their sons. When she asks to go to a party he tells her no because the boys can’t be trusted and she expresses anger that if she were a boy he wouldn’t say that. I think that a lot of girls, no matter their background, can relate to the unfairness that girls are often deprived of things in order to “protect them.”

Kamala’s solution is to sneak out and go to the party anyway. When things don’t go well there she leaves early and encounters the Terrigen Mist which transforms her into an Inhuman. While in the Mist she hallucinated about the Avengers and expressed a desire to be like Captain Marvel (Carol Danvers), right down to the “classic, politically incorrect costume.” She initially wished to be like Carol out of a desire for a less complicated life, and I’m sure that she will soon realize that being a teenage superhero will only make things harder.

As far as the costume goes, I was a big proponent of Captain Marvel getting a practical and functional costume. Carol’s new costume also fits her no-nonsense military personality better than the old bathing suit with boots look did. However, if Kamala does end up taking up the more traditional Ms. Marvel costume on a permanent basis it wouldn’t necessarily be a bad thing. It makes sense for a teenager to want to take up the costume that she grew up seeing and Kamala has already expressed a desire to be “beautiful” like Carol. I just hope that they don’t just use it as an excuse to overly sexualize and objectify Kamala.

Despite the space restrictions in a single issue, Wilson makes sure that we know Kamala in many different ways. One of my favorite scenes showed her writing Avengers fanfiction and her mother’s confusion about what that means. This is a girl who looks up to the Avengers and daydreams about them. It will be interesting to see how she reconciles her imagination with the realities of being a hero, especially when it means leaving the safety and security of her computer.

Creating new characters and giving them their own titles is a very risky move in comics. So many of the characters that are popular enough to make money have been around for decades and new characters don’t get the name recognition it takes to sell books. Giving new characters connections to older characters is one way around that and by calling Kamala Ms. Marvel she is being linked with Carol Danvers from the start even though they don’t have any actual connection yet. Legacy characters have had mixed results in the past, but hopefully creating a new Ms. Marvel will bring more attention for both Kamala as well as Carol, who is now using her own hand-me-down title since she became Captain Marvel.

Ms. Marvel is the kind of comic that I want to see more of in the future. New characters and more diversity means that comics can reach more people and tell new stories. One of the biggest complaints I hear from long term comic fans is that they are tired of the same stories about the same characters being told over and over again. Marvel has given us something new with Kamala and hopefully comic fans will give the new Ms. Marvel a try.

Check out Ms. Marvel #1 at your local comic shop or buy it on comixology.

What did you think about Ms. Marvel? I’d love to discuss it with you in the comments!