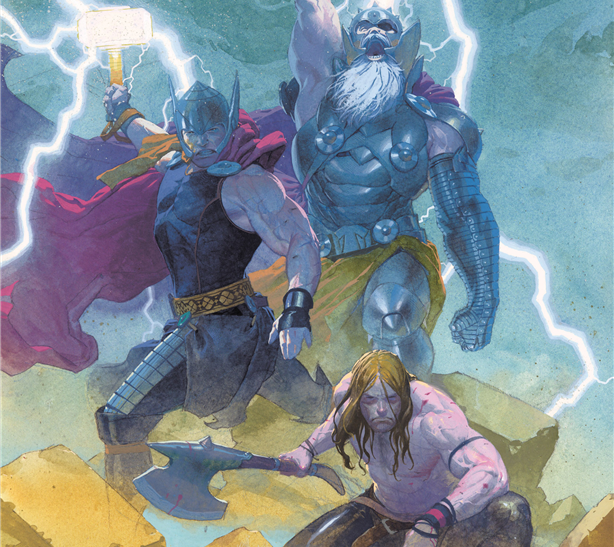 Thor: The Dark World opens in America this weekend, bringing attention back to the Asgardian corner of the Marvel Universe. Thor is one of my favorite Marvel characters so I’m very excited to see the movie—excited enough that I’ve had my tickets for a month. It’s a very good time to be a Thor fan between his presence in the theater and the excellent work being done by Jason Aaron in Thor: God of Thunder.

Thor: God of Thunder was one of the new titles launched as a part of the Marvel NOW last year and I’m not exaggerating at all when I say that it’s the reason that I’m currently as immersed in Marvel comics as I am. The Marvel Cinematic Universe reignited my interest in comics and when I saw that Thor was getting a new title I went out and bought issue one. The next thing I knew I had a pull list at my local comic shop full of titles.

As you can probably tell from the title of the comic, this series doesn’t shy away from the idea that Thor is a god; in fact it embraces it and uses his divinity to drive the plot. The first major arc of the series pits Thor against a new villain Gorr the God Butcher. Gorr is angry at gods for failing their subjects and seeks to liberate the word from gods by murdering them all. In order to stop him, Thor has to piece together the mystery of the murdered gods with information gathered over his entire lifetime.

Right from the first page Aaron makes it clear that he has a good grasp on Thor’s character and what it means to be immortal. He tells the story from Thor’s point of view at three different times in his life. He shows us young Thor before he was worthy of Mjolnir, the current Thor who is a member of the Avengers, and old Thor who is King of Asgard. Each of these Thors holds a piece to the puzzle that is the God Butcher and eventually they all play a role in his downfall.

What really makes this story work is that each Thor is written with his own unique voice and given a personality that makes sense based upon his age and development. Aaron doesn’t just give us one larger than life God of Thunder, he gives us three and he juggles them perfectly. By showing us each Thor’s story, Aaron adds to the reader’s understanding of what it means to be immortal and how very long Thor is going to live.

All Marvel heroes are deeply flawed and Thor’s central flaw lies in his arrogance. In his youth he was rash, overconfident, and more than a little rough around the edges and Aaron’s young Thor is all those things. As you can see from the above picture, he also loves a good party and a good fight.

The Thor of the present is the compassionate hero we are familiar with from current Marvel comics. He has gained wisdom over time, but still appreciates a good fight and a stiff drink. Thor’s compassion is one of my favorite aspects of his character and one of my favorite parts from this arc was when he answered the prayers of a dying people on a far off planet. He brings the rain to save them and then stays a while to visit with them, telling stories around a campfire and generally just enjoying life.

King Thor is from a time far in the future when he has taken over the throne of Asgard. This Thor is worn down and bitter from the losses he’s experienced and the pain of being the last god left alive by the God Butcher. In many ways he is similar to his father–a fact that present Thor isn’t thrilled about when they meet—but he is still Thor in all the ways that count.

Time travel is common in the Marvel Universe and eventually all three Thors team up to take on the God Butcher. The situation lends itself to a lot of humor in an otherwise dark comic that often borders on the horror side of the fantasy genre.

Without going into too many spoilery details, very few villains can possibly win when faced with three different versions of the most powerful hero on the Avengers roster–or even a single Thor wielding two different Mjolnirs, which happens as well. Aaron creates a credible threat with Gorr and he manages to push each Thor to his limit, but eventually their combined might prevails.

When the dust clears what the reader is left with is a rousing story that spans vast distances in both time and space. The story starts as a murder mystery and develops into the grand fight that you would expect from Thor. It also manages to get to the heart of Thor’s character and asks who he is when his back is against the wall. Along the way Aaron also poses broader questions about the purpose of gods in the universe. There are no easy answers here, not for Thor and not for the reader, but it is a gripping journey.

As a fan of Thor it’s reassuring to see a writer really dig into what makes him the hero that he is. Thor has a fabulous supporting cast of characters, both friend and foe, but in recent years many of them have stolen some of the spotlight in his comics. There’s nothing wrong with that because they are all worthy of attention, but with this series Aaron returns to basics and puts all of the focus back onto Thor for a while. I’m sure he will reintroduce Thor’s supporting cast as the series progresses, but if you like Thor himself you’d be hard pressed to find a better read than the first eleven issues of Thor: God of Thunder.

Also Thor rides a space shark. Seriously, he rides a shark through space and if that isn’t enough to sell the title, I don’t know what is.

The story of Thor versus Gorr the God Butcher begins here:

What do you think about Thor: God of Thunder or Thor in general? I’d love to discuss all things Thor with you in the comments!