A Review of the Marvel Comic App on Chrome 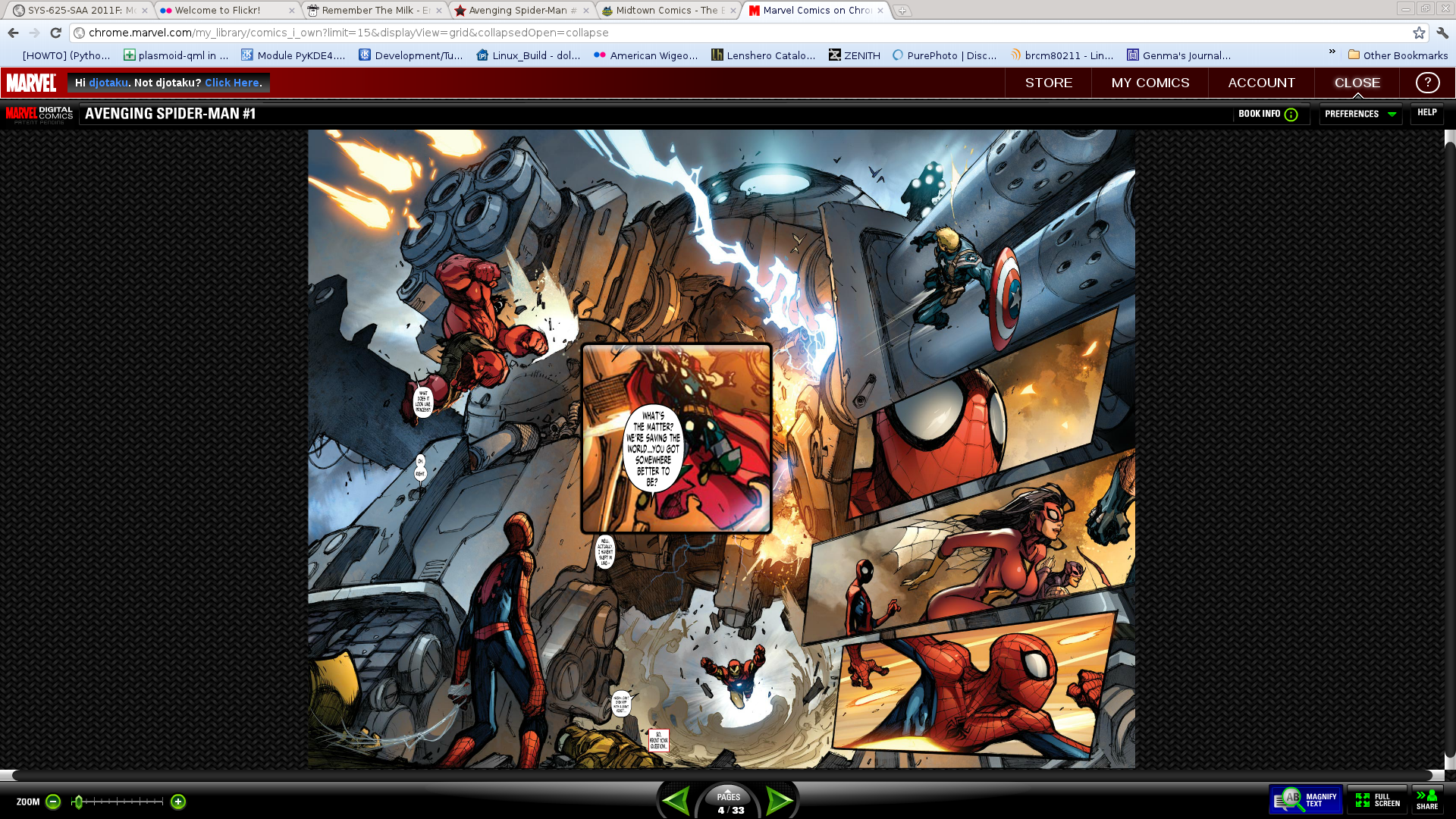 Since Avenging Spider-Man #1 came with a free digital copy, I decided to check out the Marvel Comic App.  I don’t have a smartphone, so I had to check it out in Chrome.

I take a look around at the app.  Along the top is the menu bar.  In the middle they have a featured book and a free book available.  Along the bottom they have their featured comic book runs.  They’re arranged so as to mimic a bunch of books in a comic shop.  It’s one of those things that looks nicer than it works in practice.  You essentially have to go from back to front because going the other way makes the issues block the ones behind them.

I think it’s pretty neat that they have a free book!  This time it’s Avengers #270.  Knowing the way I am, this could really  lead to me buying more issues! So I can see how the story ends.  Quite crafty there, Marvel!  I imagine lots of comic book readers are like that as well.  However, they went and messed up by how slowly it works – at least on my computer.  Actually – it worked much better on my netbook, which was weird because that’s way under-powered compared to my desktop.  So that inspired me to give it another shot before publishing this article and it looks like perhaps the servers were just a bit busy that day as it was a new comic day and maybe everyone was trying out their Avenging Spider-Man code.  Today it worked at an acceptable speed.  Still slower than I could potentially read a physical comic, but not too bad!

It was also hard to get the comic to show up in exactly the right spot.  Sometimes you need to select the two page format. But the cool thing about smart format is that it shows a two page spread when there’s one otherwise just shows one page.  This actually also turned out to be a bug perhaps related to the fact that the servers were so busy that day.  Because when I read it on my netbook, I actually found that the way they set up the book if you use smart panels, it shows you the whole page and then it zooms in to the different areas where there’s text.  So while I originally had this complaint:

Of course, part of what makes reading comics on an electronic device more annoying than as a book or magazine is that text harder to read than on paper when taking in the whole page.  However, it does have the ability to magnify text, which works very well.

In practice while reading you actually end up with your screen looking like this:

It’s pretty nice that there are lots of free books available.  So if you just want to read a comic, you can get your fix.

There are no ads in the comic, but does show the Avengers: X-Sanction preview.  (In Avenging Spider-Man)

So is this ready to replace physical comics?  I think it best fits in as a supplement.  We don’t have infinite space on our shelves, so if you wanted to own all the comics that Marvel has ever published, you’re probably best off with digital comics.  Also, depending on how the price compares for the particular book you’re interested in, maybe it could help you afford to read more comics.  You buy your favorites in physical form and the extras on here.  There’s always going to be something special about holding a comic – just as with books.  So just as there are some books you want to buy as physical books and others you’d buy digitally, I can see that being another path.  Of course, only physical comic books can be traded and acquire value.  And physical comic books don’t have any DRM that keeps you from doing whatever you want with them – sell, trade, scan, lend to others, etc.  And digital comics can’t be signed by creators.  I think they’ve done a very good job with this app and I think in my kids’ generation when everyone has a tablet device, many or most comics will end up in this format.  Of course, it might end up killing the idea of variant covers and other things might change, but that’s life.

I suggest you give it a shot, all it costs you is signing up for yet another website.  And you can try out the free books to see if it’s for you.  They look pretty awesome on my screen and I’ve heard that iPads and some Android tablets also have beautiful color reproduction so you can see how it looks on your device.