Bitch Planet is the comic we need Right Now 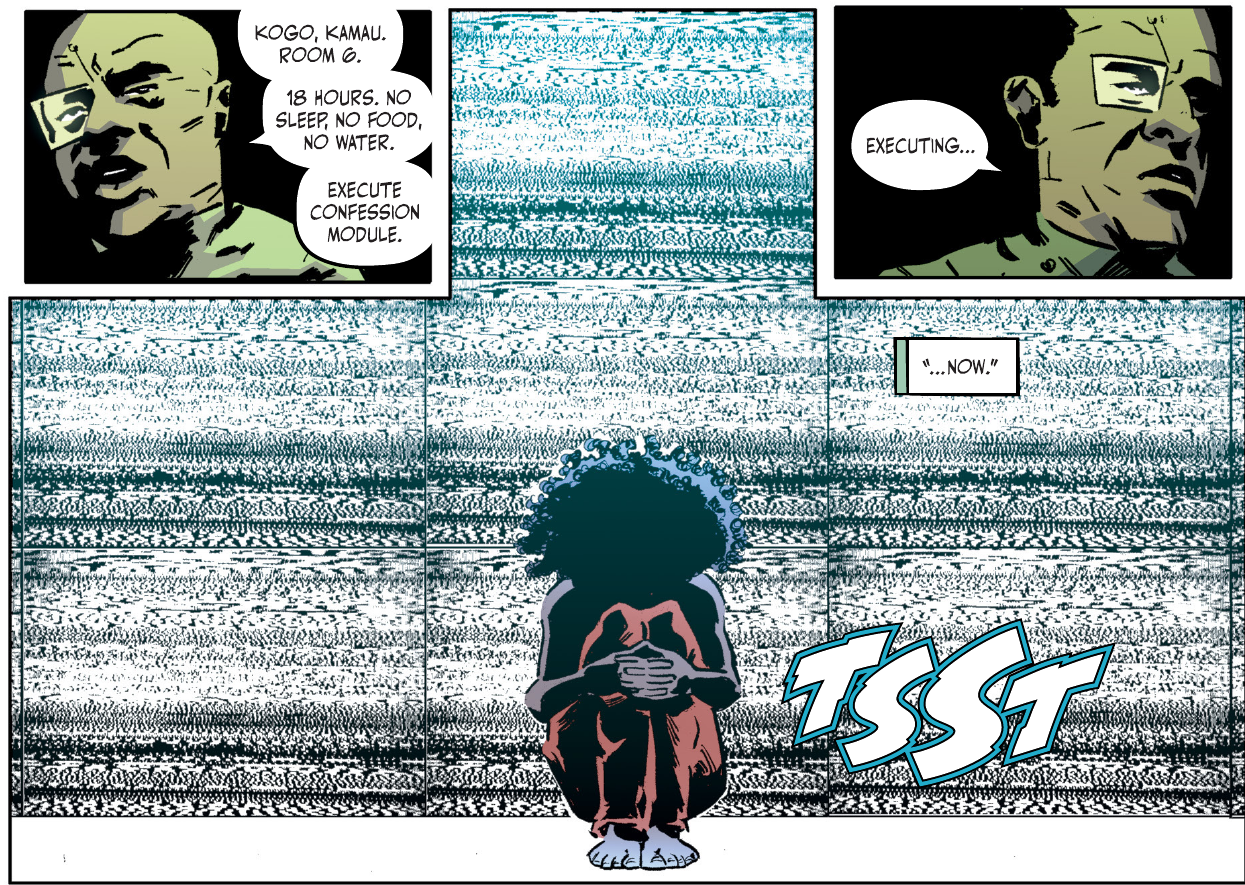 Starting in college and continuing in the following decades I’ve slowly been learning that women have a completely different experience of the world. I thought I understood the struggle women had compared to men; at the highest level, being expected to be successful as both mothers and career women without a social support system. But as the years went on and I was exposed to more and more women-created content – articles, blog posts, comedians, etc I discovered there was a whole experience based upon avoiding verbal, physical, emotional, or sexual abuse from men. An experience I had no idea existed, but which women were initiated into by other women in their lives; things to say and do to avoid becoming a victim. Mostly because they are in a system that rarely recognizes them as victims. So I was not as surprised as some men claim to be on Twitter and Reddit that women had finally had enough culminating in the current moment where some powerful men have been toppled by a history of sexual abuse. (EG Weinstein) It’s clearly this moment that Kelly Sue DeConnick was tapping back in 2014 when she first started Bitch Planet, putting her ahead of the current moment, but as I’ll discuss, also a little behind because of the slow nature of releases for the book.

The book has some great spiritual mothers in Atwood’s The Handmaid’s Tale and Collins The Hunger Games, but DeConnick has pulled a Tarantino by putting those two stories in a blender with the exploitation, grind-house movies of the 1970s; or rather a reconstruction of that trope. To tackle the first source, Bitch Planet imagines a world led by a patriarchy known as The Fathers who have codified a system of behavior for women that harkens back to the Eisenhower housewife stereotype mixed with the beauty standards of the 1990s – thin and large-breasted. (I call this the 90s because there appears to have been a walking back of cup sizes from the excesses of the 90s and an effort to find more reasonable weights attractive) As in Handmaid’s Tale the punishments are swift and hyperbolic for stepping out of line. During Penny’s flashback scene in the first volume, a man threatens to report a woman to the authorities for rolling her eyes at him. The seriousness of this threat is communicated by Penny suddenly offering him an extra muffin (she runs a bakery) to divert his attention. It’s an important sign of female solidarity. While the world of Bitch Planet does not seem to have created a snitch society among women as in Handmaid’s Tale (Bitch Planet: Triple Feature has some stories of women helping each other out), it is character-defining that many of the protagonists help others rather than just looking out for themselves. Like any good, modern dystopia since the cyberpunk era, I love the way that the world is built up through the advertising found in the world. I was in love with the opening ads that tell you a lot of what you need to know before any exposition has occured: the signage to “eat less, poop more” and “less of you to love”. The Hunger Games elements actually function among the men in the history of the Bitch Planet story, in the form of an ultra-violent form of rugby that is supposed to allow the world to get rid of its Us vs Them mentality by channeling that into sports teams. In this sense, it serve the cohesive function as in Hunger Games even if it’s not about sowing distrust as that series is. Although the mere 10 issues (plus Triple Feature) mean there is still a lot of story untold, as of now, the protagonists have been scheduled to play a game against the men, but it’s unclear if this will happen or if it was merely a way to set up the events of the second volume.

Most of the exploitation era of film was before my time and I have avoided seeing most of it. I’ve seen the Tarantino/Rodriguez Grindhouse film and, of course, all of Tarantino’s films owe their stylistic vocabulary (if not plot and trope elements) to the genre. So I’m familiar with the tropes and ideas, even if it’s through a revival scene that involved deconstruction and reconstruction of many of the elements. Bitch Planet, of course, falls in line with these modern reconstructions. From what I understand from having learned about exploitation films and reading the extras in the Bitch Planet trades, there is a sub-genre involving women in prisons. Exploitation films being the penny dreadfuls/pulp fiction of the film media, they focus on titillation. There are scenes of prison sex that are meant to be erotic, not meant to be a documentary reflection of what actually happens in prisons. Even if one of the characters is a victim, it’s still shot from an erotic point of view. Bitch Planet turns this on its head. There is the trope of the women arriving to prison and needing to be naked and change into jumpsuits. (Justified in universe by the space-travel needing to be in the nude in some kind of gel) De Landro, however, draws a dreadful set of women who are simply nude. It may be overreaching, but the images evoked, to me, some of the images of concentration camps or refugee camps. Coupled with the different body types and lack of pinup posing, there is nothing sensual about it. The same occurs in the shower scenes. The women depicted seem to just trying to get clean and enjoy the moment of solitude. The one bit of sexuality actually serves two purposes – first as an act of rebellion by two lesbian characters and second to set up the guard who will be blackmailed into becoming an informant.

One part of Bitch Planet that is more of a background element in volume 1 and brought a little more to the fore in the second volume is the idea of intersectionality. In the simplest terms it’s a way to think of how societies can be structured to assure that marginalized groups do not band together against the dominant group. For example, women are, generally speaking, treated poorly compared to men both in our world and in the world of Bitch Planet. Women make up half the population how can this be? Because upper class women do not see themselves as part of the same group of lower class women. And whites don’t see themselves as in the same group as blacks. And women from all the above groups don’t see themself in the same group as lesbians. And so what should be one powerful group – 50% of the population – is reduced into smaller groups that are individually all too small to make a change. The same thing is, of course, going on in Bitch Planet. It is seen as a big conflict point during the volume 2 riot when the trans women enter the same dome as the cis women and the cis women see them as the enemy because they’re still “men” somehow. Additionally, the opening story about the wife who was sent there has the operators of the prison (two black men) take bets on who’s going to say they don’t belong and then comment that it’s always the white girl. There’s a lot there. I found myself wondering, but not coming to any conclusions, if it was bad that most of the people in prison were black. It certainly reflects current trends. And the main characters – the ones who lead and don’t give up are black – does that make it better? Does it matter that De Landro is black? What about the fact that Kelly Sue DeConnick is white? I didn’t end up coming to any conclusions there, but I bet a think piece or a dozen could be written taken each side of those questions.

The last thing I wanted to talk about is whether the comic was overtaken by events. It appears to have a very long gap between issues or at least between story arcs. The story started in 2014 and only has 10 issues in the main storyline and a few issues in the Triple Feature volume, but those were produced by DeConnick and DeLandro rather than involving them as directly as the first two volumes, or so I assume. It seems to me that the President Bitch storyline was anticipating a Hillary win in 2016 and a backlash to that. Instead Donald J Trump won. In some ways, this is perfectly in line with the story – a male population affronted by the very idea of a woman president takes their revenge. In other ways, it’s a sign that the history of the world of Bitch Planet is more progressive than ours, even if the outcome is more of a conservative dystopia.

DeConnick and DeLandro have created a unique story and I hope it’s finished on a decent timeline because the combination of tropes and story are very compelling and I’d like to see where they intend to take it – even if real world events end up changing the ending from the one they had planned.