The Fight of a Century: League of Extraordinary Gentlemen Volume 3 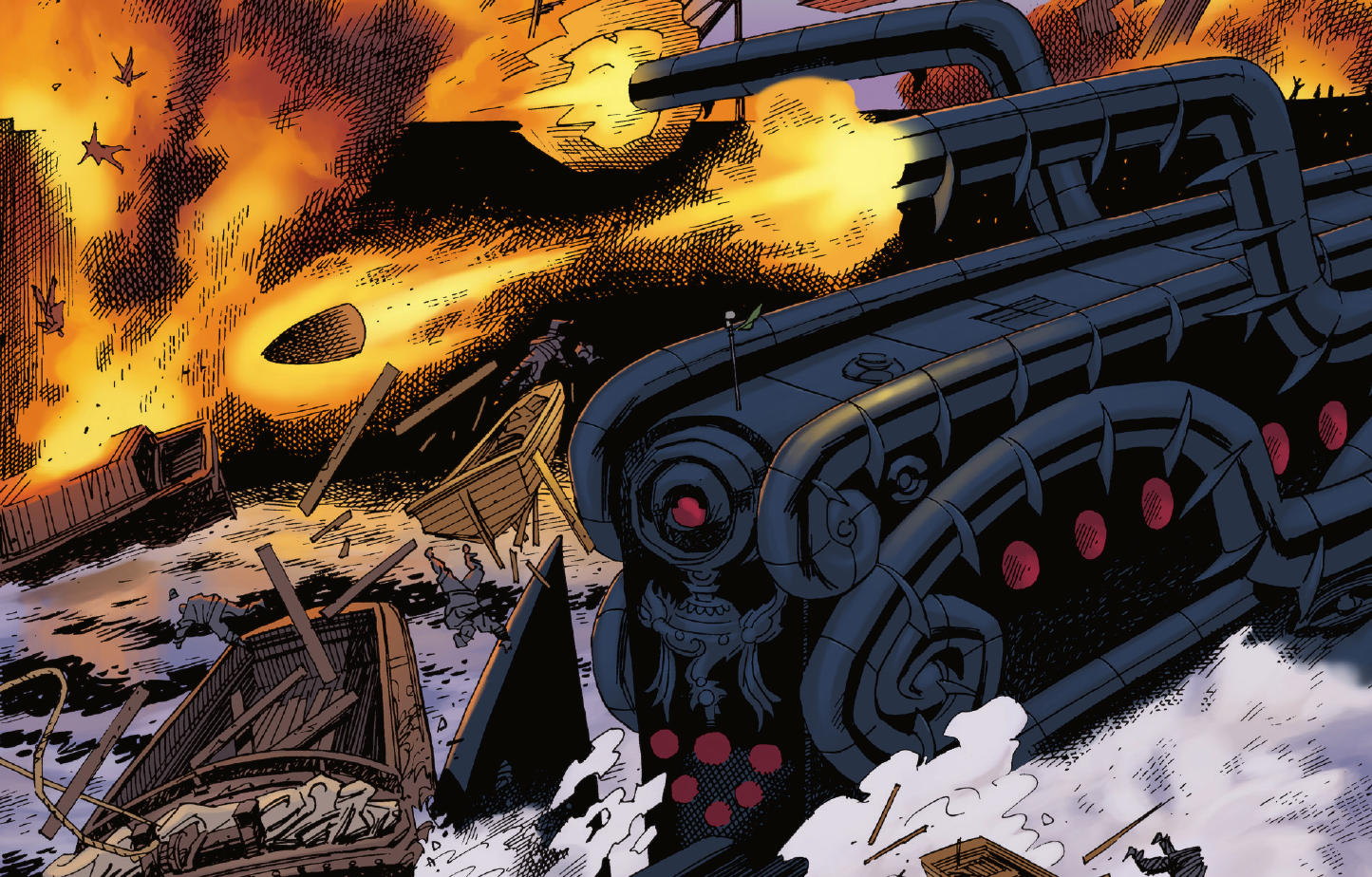 I try to go into these books without any foreknowledge about the particular volume. It’s all too easy when researching to end up coming up against the opinions of others and I’d rather form my own opinions before potentially incorporating the views of others as I write these posts. In the case of The League of Extraordinary Gentlemen Volume 3: Century, this was not a good idea at all. I’d previously read volumes 1 and 2 and they seemed to follow one another in terms of narrative. In this case, on the other hand, you’re best off consulting a reading order. I spent a large chunk of the narrative profoundly confused about what was going on because between each of the three vignettes it was assumed the reader had read The League of Extraordinary Gentlemen: Black Dossier and the Captain Nemo trilogy. Additionally, when collected, all the text story portions are placed serially at the end, but they take place within the timeline of the comic portion. Luckily, while it made for a poor reading experience not to know this, Comic POW! is not a review site, and the missing information did not prevent me from noting the themes present in the narrative.

While the first volume contained characters everyone could pretty quickly recognize, volume two began the process of getting a bit more esoteric. At the time of the release of volume 2, John Carter of Mars was not quite as well known in the public as The Invisible Man or Dr Jekyll and Mr Hyde. In volume three Alan Moore takes this to 11 and includes the following characters which you may or may not be familiar with: Orlando (from a Virginia Wolf book as well as a BUNCH of other characters all mixed into a blender a la Jack in Fables being every time someone was named Jack in a fable), Prospero, Thomas Carnacki, A.J. Raffles, an Aleister Crowley analog, Andrew Norton, Vince Daken, Jack Carter, Kosmo Gallion, Jerry Cornelius, Voldemort, Harry Potter, Colonel Cuckoo, Rosa Coote, O from The Story of O, Golliwogs, and even more. I consider myself to be well-read – I’ve read most of the classics and have literally read nearly 1000 books or more. I didn’t know MANY of these characters. Or, in some cases, like Voldemort, it was easy to miss the clues at first if you didn’t pay attention to all the small details. In both Top 10 and this series, Moore rewards the reader who has lots of background information in their heads. It provides a depth to the characters that he doesn’t have to waste pages establishing. Of course, this depends on the reader knowing the references, but it can be seen as rewarding a reread.

One theme that’s constant in Alan Moore’s work is that of sexual assault. I’ve been thinking about this topic for years, ever since I first was introduced to the idea of Women in Fridges and then learned about the attendant tropes like the raping of female characters. Of course, in League of Extraordinary Gentlemen Mr Moore is an equal opportunity rapist as volume two has Mr Hyde rape The Invisible Man as a punishment for his treachery. But, getting back to the tropes, the problem is not the existence of sexual assault in comics, books, TV shows, and movies. It’s something that happens. I know someone who’s been raped and, statistically, you, dear reader, do as well – even if you don’t realize it. It’s a threat in times of war, when people have their faculties compromised, or in societies where the rapist rarely endures punishment (or in which the woman’s punishment is worse despite being the victim). The problem with the trope comes when every single writer uses it as a way to inflict trauma on (mostly) women characters. It becomes lazy. And, in the case of Mr Moore it gets disturbing when it’s present in every book. This book contains the following sexual assaults: Janni Dakker is raped when she works in a hotel, Oliver Haddo rapes the wife of someone whose body he’s inhabited, and Mina is felt up by Voldemort when she’s on drugs. What’s more problematic than the rapes themselves is the message they seem to be sending. Janni Dakker’s rape is essentially punishment for not inheriting her father’s position at the helm of the submarine. The rape is the precipitating event to her reclaiming her inheritance and it’s pretty well telegraphed that she wouldn’t have been raped if she’d just submitted to her father’s wishes.

On a less controversial note, Mina and Allan Quartermain are used to explore the effects of immortality. It’s pretty clear once anyone does any thinking beyond the cursory, that immortality is often more of a curse than a blessing. Even Buffy reflects in season 6 that life has more meaning because it’s fleeting. Each of the two immortals deals with the condition differently. Quartermain falls into a deep depression that leads to drug addiction. It’s a way to dull the continuous life and disappointment. Even in extreme futuristic science fiction in which people can live forever often has people take time unconscious or “dead” as a way of dealing with the infinite tedium. Drugs, of course, offer a similar break for a never-ending life. Mina, on the other hand, becomes obsessed with not ending up an old person in a young person’s body. This leads her to act more and more recklessly, culminating in her drug use in the 1960s that leaves her vulnerable to both Voldemort’s molestation and Oliver Haddo’s spirit attacking her in the astral plane.

Recently as the trans community has become the new front in the LGBTQ fight for rights, many of the trans struggles and issues are becoming more well known. Growing up I always thought it was just that some people enjoyed wearing the clothing of others. And while that’s certainly one part of the spectrum of trans, I have recently learned about how some people who are trans are disgusted by the body they inhabit. I’ve also been more directly exposed to the stories of people who have changed their bodies to conform with the gender they align with.Of course, if people elect to go the most extreme route (adding or removing organs), it can be very difficult to reverse. Orlando is a very interesting character in this respect in that the character goes from male to female every few years. We don’t get as much time to explore this as we might if it were a slightly different story that gave the characters more time to breathe, but from what we do see – it appears that Orlando seems to relish each transformation as a chance to live life in the shoes of the gender he currently inhabits. I don’t have first-hand experience in gender fluidity, but from what I’ve heard on programs like This American Life, it does seem to ring true that when people are able to transition (or in some cases just dress in the clothing of the other), it releases inhibitions that allow them to act differently. There’s also the case for different neuro-chemical balances affecting people differently. The same subject of that This American Life story related how he/she viewed things differently and reacted to the world differently under the effects of different hormones. He also ends up being a lot more fluid in his sexuality. Having been both a man and a woman appears to have given him an attraction for both sexes and he doesn’t limit himself to only pursuing the sex opposite the one he currently inhabits. While it’s certainly unfortunate that Orlando doesn’t have control over his changes (in the text portion of the book he has to flee from his fellow soldiers during ancient times once he starts becoming a she), I feel that can certainly help people empathize with the lack of control trans people feel. I also feel that Orlando (who inherits this sex change property from a Virginia Woolf story) may end up being a foreshadowing of a tolerant future in which people are free to fluidly change their gender expressions daily if they so wished. And, with possible future tech the ability to be able to change back and forth without lasting physical effects. Many science fiction stories and short stories have mined similar territory.

Mr Moore has a vaunted position in comics for a reason – although he has an unfortunate tendency to include sexual assault in his stories, he also has a way of throwing lots of complex ideas out without turning the story into A Very Special Issue. One is often left with quite a lot to think about after the excitement of the story has abated. This volume was no exception.

The League of Extraordinary Gentlemen Vol 3: Written by Alan Moore with art by Kevin O’Neill. Lettering by Todd Klein

2 thoughts on “The Fight of a Century: League of Extraordinary Gentlemen Volume 3”