From One President to Another: Letter 44 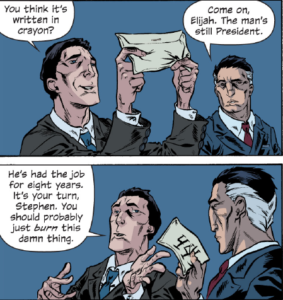 Letter 44 – Who do you think the previous president is supposed to be?

There’s a quote people like to throw around on the Internet, “Never attribute to malice that which can be explained by stupidity.” Some attribute this to Napoleon, but it doesn’t matter if he actually said it, it’s a pretty good maxim to help people out when they’re finding themselves engulfed by the temptation to believe in conspiracies. It’s certainly something that got many a person through the George W Bush presidency. But in Letter 44, author Charles Soule flips the saying on its head. What if all the crap you hated about Bush – all the wars he started seemingly just to get back at the guy who flipped the bird at his dad – what if it was all just a coverup? What if the president was actually just using that as an excuse to pump up defense spending budgets in order to get the technology needed for a top secret space mission to meet the first intelligent life humanity had discovered? It’s certainly a tempting premise – it makes all the destruction and lives lost no longer meaningless. 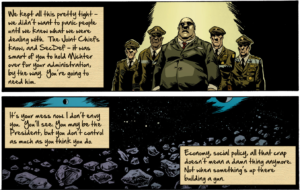 Letter 44 – We kept it pretty tight

The eponymous letter in which the previous president reveals all of this to the new president is essentially a way for the previous president to explain his actions and communicate to the only other person who will have the ability to understand his position. While we’ve similar ideas in fiction – for example the revelation to the president in Independence Day that Area 51 is indeed an alien research facility – it’s not merely an idea rooted in fiction. It is something that happens every 4-8 years with modern presidents. The intelligence community is mostly composed of career employees who continue their work day in and day out regardless of who sits in the White House. Within their silos of information they retain knowledge of various clandestine bits of information and continue to work towards their goals. But every new president is given the classifications needed to do his or her job and suddenly is able to know a LOT more about how things really work.

On its own this would make a pretty interesting tale of a Beltway insider who is now part of a very small club. But, for narrative reasons, the new president is not content to keep all as its been operating and so we move into the second thesis of Mr Soule. He considers the post War on Terrorism military industrial complex. One of the biggest criticisms on this front in the real world hinged on the fact that some members of Bush’s cabinet previous held positions with contractors who stood to profit from a destruction and rebuilding of a country or two. It’s a fact of life that corporations never opt to make less money and so when faced with defense department cuts to planes and ships we no longer need, they often lobby their congress members to retain the contracts. Indeed, sometimes the congress members need no reason to push back other than the fact that they may lose jobs within their district. Soule ramps this up to thriller movie levels and has murder on the table for those who would deprive the large companies of their profit margins. 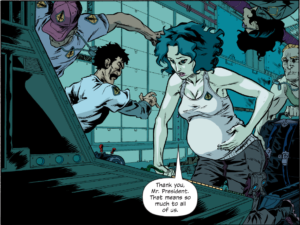 Those two plots would make a great Robert Ludlum novel, but Soule goes even further and gives the reader a glimpse into the lives of astronauts on a mission longer than any yet undertaken in the real world. In an unsurprising move, the mixed sex crew ends up in a few polyamourous relationships. And, in the first trade, we learn that one of the women is pregnant. I believe NASA still maintains that no copulation has taken place aboard the space station, but for a sufficiently long journey, it would be hard to imagine the denial of one of the most basic of human needs and desires. While Soule declines to deal with issues of the viability of pregnancy in space, the issue of sexual partners in a long trip in close quarters is one the human race will need to confront if we are to begin space travel beyond the moon. In the best case scenario for the complications – there would be extra stress that could lead to issues with mistakes being made. In the worst case scenarios, given the nearly solitary confinement-like issues of spacecraft, people could end up sabotaging each other, perhaps even leading to death. Additionally, there is no protection against rape and no ramifications for months or years, if ever for the perpetrator.

It’s a tribue to Mr Soule’s writing that these plots don’t make the book seem overstuffed. Of course, it’s also important for this book to have great art. Dan Jackson and Alberto Albequerque do a great job portraying the feelings on the character’s minds. They also deliver on both the technology being used by the crew and the alien landscapes they explore.

As Comic POW! has explored the world of comics outside of the Big Two, we’ve seen quite a lot of new and interesting plots and genres. But, Letter 44 is a pretty rare treat of both science fiction and political intrigue.

Letter 44 written by Charles Soule with art by Dan Jackson and Alberto Albequerque.

One thought on “From One President to Another: Letter 44”