Coming back for Seconds 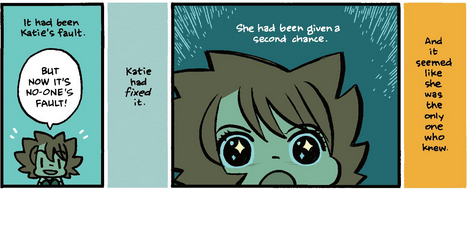 The concept behind Seconds is not original. I’ve read and seen similar stories (The Butterfly Effect) – I even saw a trailer for a new movie in that vein (although my Google-Fu is failing me in finding the title right now). The execution, however, was deeply personal and remained rooted in the character of Katie. Unlike the gravity behind the changes in The Butterfly Effect (child abuse, etc), Katie’s changes are personal and somewhat petty. Or rather, petty to the outsider. To her, they are nearly as important as life itself because she sees her life slipping away.

Bryan Lee O’Malley is almost the same age as I am. So we have a lot of the same cultural touchstones and a lot of the same life worries. O’Malley and I are already in our thirties, so Katie’s story is a bit more resonant with me than it might be if I were younger. And, perhaps the same way my wife and I saw Ariel from Disney’s Little Mermaid as misunderstood when we were kids and a spoiled brat now, I may have different feelings about Katie when I’m older.

Katie is 29 and the chef of a restaurant called Seconds which she started with her friends. She’s incredibly successful there and everyone loves her food. But as most of the partners have moved on, she’s found herself not working with her best friends, but with a bunch of young people that she feels out of touch with and who make her feel old. Also, her goal was to be the chef so she isn’t a part owner of the restaurant. So Katie is starting a new restaurant with a 34-year-old friend. Things aren’t going perfectly, but they’re moving along when she makes an ass of herself in front of her ex-boyfriend and tries to get some sex to show herself she’s desireable. This leads to one of the waitresses getting badly burned in the kitchen. When Katie gets back home she finds a literal magic mushroom that allows her to undo her mistake and we’re off to the races.

Scott Pilgrim, which I wrote about last week, is about a group of characters who refuse to grow up. The world has to drag them along. Seconds is about a character who dreads growing up. Scott Pilgrim is impatient with things because he’s being immature. Katie is impatient with the lack of progress on her new restaurant because she’s getting older and she feels trapped in her old life. She can’t move on until it’s done and while she’s in limbo, she’s also in emotional limbo. She hasn’t gotten over her ex-boyfriend and her relationship with her protege, Andrew, is only about proving to herself that she is attractive enough. They only can even get started when she’s criticizing him.

Eventually, through Hazel, we learn about House Spirits and that it is the house spirit’s powers that allow Katie to change her mistakes. The House Spirit tells Katie she’s only allowed to use one mushroom, but once Katie gains the ability to fix every interaction to make it perfect, she becomes addicted to the power. This is, of course, what each and everyone one of us would do. Outside of various neurological states, humans are wired to seek pleasure and avoid pain. What seems more painful in the moment than a misstep causing an argument or the loss of a friendship? It’s the reason life is so painful when you’re a teenager – the emotions and situations are near-adult, but the ability to see the end isn’t there yet. Even as an adult, it can really sting when you stick your foot in your mouth. So once Katie realizes she can go all the way back, she undoes the argument that leads to her breakup with Max.

O’Malley makes things difficult for Katie in three ways. First of all, there’s the important lessons that often lies at the core of all of these tales – life is unpredictable. Putting one event closer to what you’d like might put other events further from what you’d like. Consider the canonical time travel example of killing Hitler. Perhaps this leads to a leader who is better able to conquer Europe. So we now all live under a horrible totalitarian government. This is best illustrated in Seconds when Katie’s changes lead to her being married to Max. Everything may be great in the personal life department, but everything about her restaurant is diametrically opposed to what she would be able to live with and be happy. Second, O’Malley makes Katie live outside the changes, so she knows how things used to be. The constant need for perfection combined with her inability to remember every single thing she’s changed leads to her nearly driving herself insane while trying to make herself happy. Additionally, like the Adam Sandler movie Click, she doesn’t have any happy memories of her time with her boyfriend. Finally, through a plot twist I’m not going to ruin, the universe itself begins to fall apart as Katie keeps changing things.

Katie comes to the realization of how she ended up in this predicament in the first place, she was trying to make things at Seconds perfect instead of looking forward to her new restaurant. She was hanging on to a past that was no longer hers because it was comfortable and because she knew it. The future was scary and uncertain. Once she was able to come to terms with this, she was able to return things to normal and move on with her life instead of being stuck. This is often so true for us, it’s by letting go of the past that we can move forward. We can remember it and learn from it, but we have to move on to move forward.

At the meta level, there are a few things I wanted to point out. First of all, I enjoyed that the book has a narrator – it’s interesting that children’s books almost entirely contain narrators, but adult books rarely contain narrators. O’Malley has Katie argue with the narrator a few times – that’s not unique, but what is unique is that it’s implied early on that the narrator is Katie’s internal monologue. It becomes a representation of that part of our brain that can see things a bit more clearly than the conscious part. Whenever she disagrees with the narrator it’s often the case that the narrator is correct or closer to the truth. The fact that Katie argues with the narrator seems to indicate that Katie isn’t telling us the story after the fact, instead we’re seeing her try to figure out her world in real time. Her struggles made me think of my life and the back and forth I go through with big decisions.

Second, this book continues the art style from Scott Pilgrim – an east meets west manga mashup that reflects both the influences of my generation (My daughter’s new favorite show: My Little Pony: Friend is Magic has a similar style) and O’Malley himself – an Asian who grew up in Canada. Within this style it’s interesting that nearly every character in the book is in an almost chibi style (a manga style that simplifies character design) except for Max. I think this is supposed to communicate not only his importance to Katie, but also his singular effect on the narrative. When Katie sees him for the first time since their breakup, the events of the book begin. In other ways he’s also central to the conflict in the book – it is because he doesn’t find out about the new restaurant from Katie that they break up and she starts her relationship with Andrew.

Finally, this isn’t anything important or thematic, but I think it’s funny that Seconds continues the tradition started in Scott Pilgrim of a clueless character being absolutely caught off guard by the suggestion that consumption of bread causes weight gain.

With Seconds O’Malley proves he was not a one-hit wonder and his work continues to be personal. Just as with other forms of entertainment, there’s room for all types of stories, but it’s rare for these deeply personal comics to make it out of the underground comics world. Luckily, O’Malley had enough success with Scott Pilgrim to bring attention to his new work.

Seconds by Brian Lee O’Malley with extra art by Jason Fischer and colors by Nathan Fairbairn. Letters by Dustin Harbin. Buy it on through this affiliate link to help support Comic POW!: Seconds