We move into a book I hadn’t read on a previous read of the series. It appears that Akamatsu is stalling a bit after the last book’s reveal. This book starts off with Naru claiming she didn’t mean it and then, after a night of zany hijinks alone in the house – Mutsumi invites them to Okinawa. We then end up in a convoluted plot that would make any any American RomCom look realistic. First, Mutsumi and her mom try to get Keitaro and Naru to finally have sex. We find out that Mutsumi’s mom worked at Hinata (how Keitaro and Mutsumi met when they were young). Then there a bit of Naru denying she likes Keitaro, but getting jealous when Keitaro and Mutsumi kiss. Her anger causes Mutsumi to get hit and think she’s five years old. Strangely, this is cured by having Keitaro pretend to marry Mutsumi. What? Whatever. Kaolla Su has a pretty forgettable story and then we finally get a bit of story progression. Keitaro is held back a  year because he missed a semester when the university building collapsed on him; he has to go back home at the end to explain his situation to his parents. Finally, we find out that Naru is tutoring middle school kids so they can get into the high school of their choice. 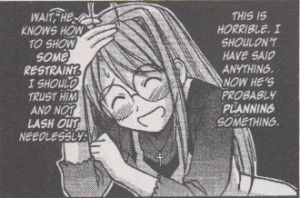 When I first got into manga and anime I thought there was a strangely large Christian representation in this Japanese artform. But it turns out that for the Japanese it’s usually a combination of the tropes Creepy Cool Crosses and Faux Symbolism. In short, because Christianity was imported to Japan fairly late compared to Europe, crucifixes don’t quite have the same symbolic meaning they do to those of us in the West. Additionally, there isn’t quite the same taboo against using it simply for fashion as there is here. Not that people don’t do it here, but they’re more likely to be making a statement. (Or to be perceived to be making a statement) 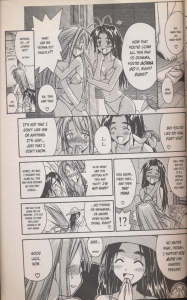 There are two things I wanted to discuss from this volume that this page encapsulates. First of all, I think it’s interesting that the translators left in the Japanese euphemism “this and that”  (a rough translation of あんなことやそんなこと). Sure, it’s clear from everything that came before this and from this page itself that “this and that” means something  at least something that a couple would do. It actually is just a euphemism for sexual activity. While this manga’s USA publication (printed right to left and all) is probably intended for people already interested in Japanese culture, without knowing the euphemism, the reader is left to infer just how direct Mutsumi is being with Naru.

Second, we’ve discussed before how the Japanese don’t have the same premarital sex taboos we do. They may have some taboos about loose men or women, but since they aren’t a predominantly Christian culture, there just isn’t a religious reason for “saving” yourself. Mutsumi and her mom appear determined to push Naru and Keitaro to the next step in their relationship, which apparently means convincing them to sleep  with each other.

Of course, one of the biggest themes I’ve tried to get across in this blog series is that while we’re very different culturally, we are still all human and all have similar issues we think about – especially in a global world in which everyone has access to all culture (especially the current US hegemony). So while there isn’t a premarital taboo, Naru does object that she’s not even engaged, yet. In other words, lack of the taboo doesn’t remove the emotional connection that many (especially a romantic like Naru) expect around sex. Naru would like to at least be engaged to someone before having sex. And here in America you hear about the non-religious (or the religious who ignore the sex stuff) people who make their partners wait some amount of time or relationship level before they feel comfortable having sex.

Well, it’s been nearly a year since my last entry, I hope not to have such a gap between this one and the next one. So, hopefully, I’ll see you in the next month or so as we use Love Hina to explore Japanese Culture, Humor, and Gender.