Rat Queens: These Women are Not to be Trifled With 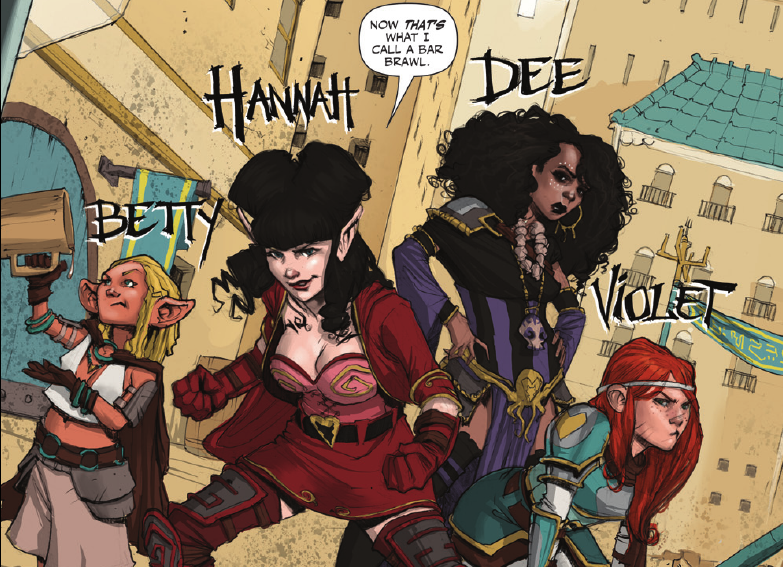 I wanted to read Rat Queens because it seemed to tick a few boxes that made it seem like something I would enjoy:

Well, it certainly encompassed nearly all of those. There are a lot of fantasy tropes hit: dwarves, elves, magic, skimpy female outfits – but there’s one key trope that it does not touch upon: a band of heroes (or anti-heroes) thrown together who have to learn about each other and how to get along. When Rat Queens starts the women already know each other. In fact, we quickly learn they are one of five adventuring groups operating out of the city of Palisade. The world of Rat Queens is one in which cities pay these adventuring groups to go out and protect the city or go on other quests. In fact, as a huge fan of the traditional jRPG, it’s very easy to see Palisade as the quest giver and then we get to follow the women around while they work through the quest before they return to Palisade to get another. As of the time at which I am writing this up, issue #6 has been released and the women have been on two quests and saved the city from attack, but the main storyline or super-arc is still resolving itself. (Compare to Buffy the TV show and the Big Bad and the little skirmishes that happen until the final battle with said Big Bad)

Our main characters are Betty, a smidgen; Hannah, an elf (or half-elf); Dee, a sorceress; and Violet, a dwarf. They’re foul-mouthed, sex-crazed, kick-ass women; the type I love to hang out with. Being more testosterone-filled than the men around them, they tend to get into a lot of trouble when there aren’t any enemies to fight. In fact, their latest bar fight leads to the mayor sending them, and the other adventurers, on a quest each and if they fail, they are to be kicked out of the city.

Since the series is still young and the focus is still on the same on the same big bad that it starts with, I’d like to shy away from revealing too much of the story. Instead I’ll focus on some of the smaller details that I think make this a series that you should definitely check out – unless you happen to dislike profanity, crudeness, drunkenness and violence. In that case you should definitely stay away from this series.

Like Saga, Wiebe has chosen to mix fantasy with our modern world. So in celebration of one of their victories, the Rat Queens throw a house party at which they serve mix drinks, get high on what’s basically elf-weed, and sleep with random party-goers. Hannah has some relic that functions like a cell phone. The girls have a kitchen where they make pancakes and the like. So it’s very much the here and now transported to a magical, midieval-like world.

While there’s a lot of fun to be had in the battles, Weibe has created a believable set of friends in the Rat Queens. It’s early on, so the complexities are just starting to reveal themselves. But, like you’d expect from a group of friends, they try to get Hannah not to keep sleeping with the man who’s bad for her. When Violet has a violent confrontation with her twin brother over having left the dwarves, the other girls offer to talk about it and to comfort her. Betty, who is the kindest and most naive or scatter-brained, is in a lesbian relationship, but the girl she’s fallen for doesn’t like that she’s part of the Rat Queens. Potential for some conflict there. She apparently also has detective-like deductive skills and quickly figures out who really has it out for them.

I do also love all the jokes in the series and I’m sure I’m not getting all of them because, while I do enjoy fantasy, I’m not a huge consumer of fantasy. I did get two great references. First of all, there was the reference to women dwarves having beards. I don’t know if this is lore elsewhere, but it is the source of a great set of jokes in Terry Pratchett’s Discworld series. Additionally, there’s a great Monty Python reference with a shopkeeper in town who everyone keeps calling Old Woman Bernadette to which she keeps replying, “I’m not old! I’m 39!” She’s also a great deconstruction joke on the effects of constant destruction on the townsfolk. Something I’ve mentioned here and elsewhere when speaking of how dangerous and annoying it is to live in Marvel’s Manhattan.

Finally, the art is superb. It goes back and forth between detailed and cartoony as necessary. Upchurch does a great job making the faces extremely expressive. Sometimes the characters can warp a bit on overhead shots, but otherwise very nice, crisp art. Sometimes it can be a bit hard to follow the flow of a fight, but I find that to be extremely hard to do across the board. It’s one place where animation has a clear leg up on comics. On the plus side, kudos to Upchurch for not giving all the women gigantic breasts. There seems to be a realistic apportionment throughout the female population in Rat Queens; a refreshing change from super hero comics.

I know I’m excited to see where the series goes and I’ll definitely stay on top of this one.

Rat Queens by Kurtis J Wiebe with art by Rocupchurch. Get it on Amazon (Rat Queens Volume 1: Sass & Sorcery TP

), Comixology, or buy it from Image Comics DRM-free.