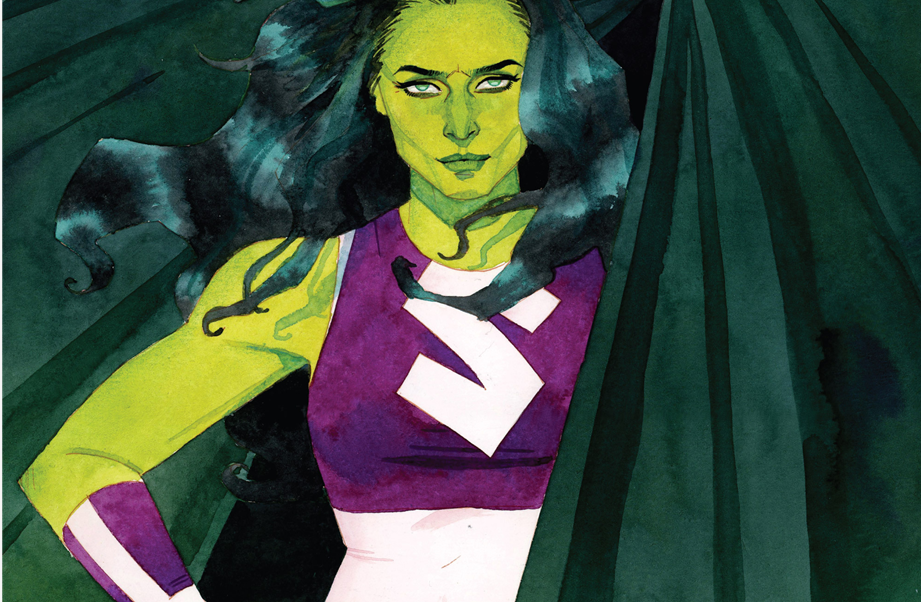 A few weeks ago She-Hulk made headlines for all of the wrong reasons. David Goyer, writer of the upcoming movie Batman v Superman: Dawn of Justice, made some truly indefensible and ignorant comments about her on the Scriptnotes podcast. He glibly insulted her by reducing her entire character down to a sex object for the Hulk in much less polite language than I’ll use here (for more details you can read this article on IGN).

I don’t pretend to be an expert on Jennifer Walters, but even without having read many of her comics I know that she is Bruce Banner’s cousin and was never intended to have any sort of sexual relationship with him. Goyer was obviously incapable of even glancing at a character wiki before he made some truly disturbing comments. Understandably many comic fans were outraged.

She-Hulk is one of the most popular and enduring female characters at Marvel. She’s a lawyer by day and a superhero all of the time. Her identity is well known, in part because she refuses to hide who she is. Unlike her cousin, she has no trouble controlling her inner Hulk and in fact she draws strength and confidence from embracing that part of herself. Her story is one of empowerment and inner strength that speaks to many women and Goyer’s reductive and misogynistic comments couldn’t have been more misplaced.

The controversy sparked my interest in the character and I decided that it would be a good time to check out the new She-Hulk title that launched as a part of the All-New Marvel Now. The series is being written by Charles Soule with art by Javier Pulido and each issue feels like a day in the life of Jennifer Walters. The approach is reminiscent of other recent Marvel successes like Hawkeye and works well here. There is a heavy focus on her job as a lawyer, but we also get to see her going out with her friends and of course smashing some bad guys.

The comic starts when Jennifer is insulted by the men running the law firm she works at, prompting her to quit and eventually open her own law office. This comic came out months before Goyer’s comments, but in light of the recent controversy there is a certain irony to Jennifer leaving her job because her male bosses devalued her exceptional contributions as a lawyer and only wanted to use her for her connections to other superheroes.

Jennifer’s first solo case is representing a woman who claims that Tony Stark stole her husband’s tech, which means going up against the legal armies that surround Tony and keep her from even talking to him. Her second case isn’t any easier as she represents Kristoff Vernard (Doctor Doom’s son) in his bid for political asylum. I love the legal side of the Marvel Universe and the cases in She-Hulk are a lot of fun. There’s plenty of room to explore the legal ramifications of the superhero world and hopefully this comic will continue to put its focus on that aspect of Jennifer’s life.

Visually the series is very unique. The cover artist Kevin Wada has created some truly stunning art that is sure to stand out in the comic shop.

The primary artist is Javier Pulido, who has a very recognizable style which gives the comic a distinct look. One aspect of his work that really stands out here are the layouts. He takes full advantage of the space he’s given, often using two page spreads with non-standard layouts. One of my favorites is below.

One of my only criticisms of the comic is that it is very text heavy. That’s not necessarily a bad thing—especially in a legal themed comic—but sometimes it overwhelms the panels and feels like a never ending block of text. The following panel is an extreme example because the wall of text is part of the joke, but there are a few other panels that are nearly as bad.

She-Hulk is just starting, but it’s already established itself as a fun, upbeat comic with a legal theme. Marvel is blessed with two series about superhero lawyers, but they both have their own niche. The upbeat and positive tone of She-Hulk feels completely different than Daredevil which has often veered into dark territory (although Mark Waid’s run has been lighter). So far Jennifer’s cases have also been nothing like Matt’s cases, which often involve crime and conspiracy. There is more than enough room for both series in Marvel’s line-up and I would love to see them crossover in the future. We got a taste of the possibilities when Jennifer seeks Matt out in the fourth issue. She wanted his advice on the asylum case as a consultant who understands both the law and being a superhero. In that issue he mentions that they have never faced off against each other in a courtroom and if that is a hint of things to come, color me excited.

She-Hulk is a strong title built around a fascinating character. Jennifer Walters has a rich tradition as a solo hero, an Avenger, and a sometimes member of the Fantastic Four and Marvel is obviously taking care to give her a comic worthy of her. It’s too bad that she only made headlines because of David Goyer’s ignorant comments, but hopefully the controversy will make people curious enough to check out her comic. If they do they will learn how very wrong David Goyer is about Jennifer Walters.

You can find She-Hulk at your local comic shop or buy it from comixology.

What do you think about Jennifer Walters ? I’d love to discuss her with you in the comments!

One thought on “She-Hulk Stands Strong”