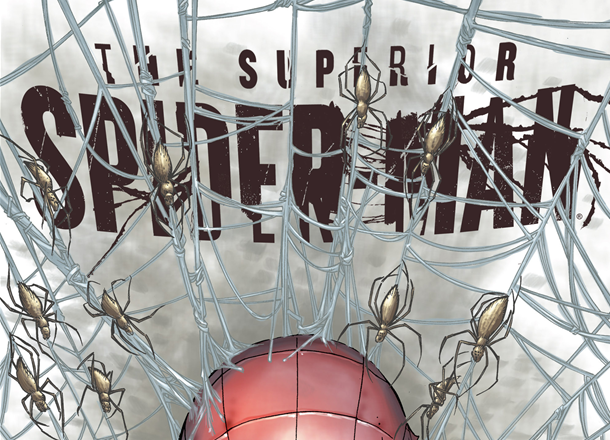 Spider-Man is without a doubt the most popular and enduring character at Marvel Comics. Each month his title whether it is Amazing or Superior is the top selling title from the publisher. The creation of Peter Parker in 1962 by Stan Lee and Steve Ditko was a revolutionary moment in comic history ushering in the era of everyman heroes and opening the superhero genre up to teenagers who were more than just sidekicks.

In 2012 Spider-Man celebrated his fiftieth anniversary and that year also saw the 700th issue of Amazing Spider-Man. Both were major mile stones and Marvel celebrated them by having Otto Octavius (Doctor Octupus or Doc Ock for short), one of Spider-Man’s greatest foes, switch minds with him and then promptly killed off the body that Peter Parker was in. They ended the publication of Amazing Spider-Man and started a new title as a part of the Marvel Now initiative called Superior Spider-Man which followed Otto’s attempts to prove himself a better hero and a superior version of Spider-Man than Peter had been.

I’ve never read much Spider-Man, usually only encountering him in team books, but even from the outside looking in I was exposed to a lot of the fan uproar at the time. People were angry that not only was their favorite character being killed off, but many of them felt that the entire character and his history was being disrespected. If you look in the letters page for the first several issues of Superior Spider-Man it is nothing, but anger and sadness about the direction of the book. I didn’t really have a horse in the race, but at the time I wondered if it was the best idea for Marvel to push its characters through new number one issues and try to draw in new fans with their most popular character on the bench and a villain in his place.

Superior Spider-Man was written by Dan Slott and continues the Marvel tradition of giving us morally complex villains, many of whom try to become heroes with varying success. Otto’s journey to attempt to be a better hero than Peter is fascinating to watch. He quickly identifies what aspects of Peter’s personality are hindrances and finds more efficient ways to help people. For example, he works more closely with the police and fire department, sending them reports of minor crimes and fires and putting his focus squarely on the situations that truly call for super powers. Otto also uses his scientific skills to create more tools to help him on the street, even improving the web fluid.

The problem is that Otto’s emotional detachment and drive toward absolute efficiency lead to more problems than they solve. Over time he basically creates a fascist state that is policed by Spider-Man and a new army of henchmen. His intent is good, but he goes about it all wrong. It is easier to kill a villain than risk letting him escape again. It is easier to torture someone to instill fear and prevent future criminal behavior. It is easier to spy on common citizens in order to prevent crimes. It is easier to blackmail the mayor for support than to actually earn it. Otto is all about doing what is easier.

Otto spent his time so focused on how to improve on the flaws in Peter’s personality that he didn’t spend enough time looking at his own. He lacks humility and is quick to attack which burns bridges for him in both Peter’s personal life and Spider-Man’s superhero life. The entire time he is systematically dismantling organized crime, he is too sure of himself to realize that he is creating a power vacuum that the Green Goblin, Norman Osborne variety, is more than happy to fill.

Otto does take time to create a new personal life for Peter. He distances himself from most of Peter’s friends—which is a relief because there would be all sorts of uncomfortable moments and consent issues questions if he had continued Peter’s burgeoning relationship with Mary Jane—and goes back to college. He earns Peter a doctorate and in the process falls in love with Anna Maria Marconi. Anna Maria is a great character that I am excited to see in comics. She is a romantic interest, a brilliant scientist, and a little person. It’s wonderful to see a wide variety of diversity being represented.

It is Otto’s relationship with Anna Maria that ultimately makes him realize that he is not in fact the superior version of Spider-Man, but that Peter is. When the Green Goblin enacts his plan to take over New York City, Otto is at a loss as to how his carefully constructed plans failed to protect the city. He’s not good at rolling with the punches and when the Green Goblin kidnaps Anna Maria he finally decides that the only person who is guaranteed to save her is Peter. He is willing to sacrifice his existence, deleting all of his memories, and allowing the fragments of Peter that still exist to take control back in order to save her.

Peter returns to a world that has been thoroughly impacted by Otto. He has to deal with the fall out in his personal, professional, and costumed lives. He’s also lost many of his own memories and has no idea what Otto has been up to in his absence. The new Amazing Spider-Man comic will have a lot of mess to clean up.

Ultimately, Superior Spider-Man when taken on its own was a fascinating, well written story about a villain trying to be a hero and just falling short. Otto had successes, but his approach was all wrong. However, when taken as a part of the greater Spider-Man canon aspects of the story fall a bit short. It takes a lot of suspension of belief for the reader to accept that Otto got away with his impersonation so long. The Avengers seem incompetent, but most importantly Peter’s friends and family seem way too accepting considering many of them have been through these sorts of things with Peter before. Otto distancing himself from them may have made it more realistic in the context of this title, but should have been a major red flag to Peter’s friends that something was very wrong.

The story would have probably been better served as a shorter arc instead of an ongoing series, but it was an interesting look into Otto as a character and Spider-Man as an ideal. It was an entertaining journey, but thankfully in the end Otto realized what the fans already knew. Peter Parker is and always will be the Superior Spider-Man. He’s just not arrogant enough to call himself that.

What do you think about Superior Spider-Man? I’d love to discuss it with you in the comments!

One thought on “The Superior Experiment”