The Devil Among Us 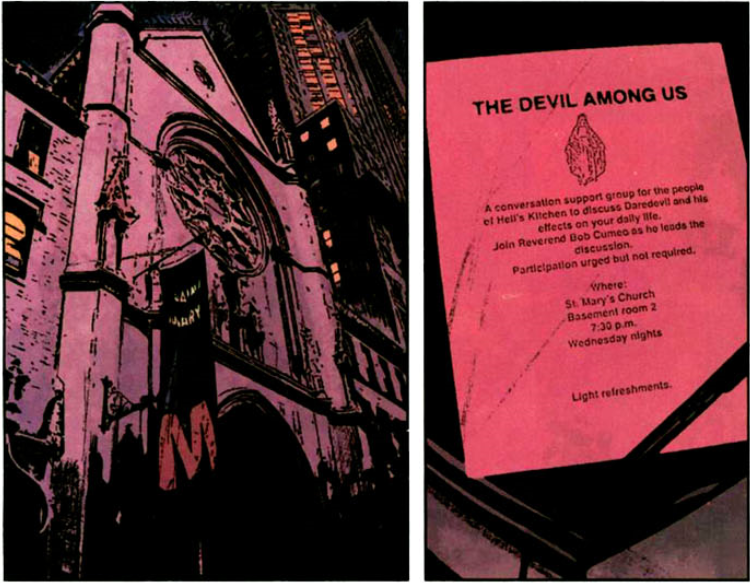 Daredevil is a title that has been blessed with many excellent writers over the years. There are so many exceptional stories that it can be hard to pick favorites, but today I thought I would revisit one of mine. The five issue Decalogue arc written by Brian Michael Bendis with art by Alex Maleev is one of my favorite Daredevil stories because it shows us how Daredevil fits into the lives of ordinary Hell’s Kitchen citizens.

Decalogue is different than most comic stories because it shows us Daredevil through the eyes of the people whose lives he’s touched. The story opens in a church basement where a community support group is meeting. The people have convened there to discuss Daredevil (aka Matt Murdock) and his impact on their lives. The idea of a support group to deal with super hero encounters is a brilliant idea and an interesting look at how ordinary people might actually react to living in an extraordinary world.

This story is a part of Bendis’ legendary run on Daredevil. His run on the title was dark and gritty and this story is no exception. The people Bendis created to attend the meeting all have stories that involve Daredevil, but the stories vary significantly. Each issue lets different people speak about their experiences and as the arc progresses we begin to see how the stories weave together.

The first issue tells the story of a drug addict who encountered Daredevil twice because of the people she was associated with. She witnessed Matt’s defeat of the Kingpin and then later her boyfriend tried to kill Matt to become the new Kingpin. It’s clear that she wanted to better her life, but didn’t know how. The second time she sees Matt he tells her to change her life and she does. The most interesting part of her story is how protective she is of Daredevil. At the support group meeting she defends him to the others.

The second issue shows us the story of a man whose father bombed Matt’s house. His father is in jail and he is desperate for his father’s approval so he agrees to carry on his father’s work. He sets out to bomb Foggy Nelson’s car, but decides that he doesn’t want to be that sort of person and instead uses the bomb on the criminals who hired him. This man is less enamored of Daredevil and spends a while arguing with the woman from the first issue about him. His connections to Daredevil were much more periphery, but add to the tapestry of Hell’s Kitchen where it seems as though everyone runs across Matt at some point.

The third issue features two women. The first woman is the wife of a serial killer and the other is one of the man’s victims who was narrowly saved by Daredevil. The woman who was saved is at the meeting because she wants to know why Daredevil chooses to dress up like the devil even as he is saving lives.

Their story introduces the primary villain for the arc which is a demon baby who encourages evil.

I’ll admit to some hesitance about the supernatural direction of this arc. For the most part the Bendis run on Daredevil was grounded in realism and focused on street crime, which makes the supernatural story feel slightly out of place. At the same time, I feel that the demon is more metaphorical about the spread of evil in a community than it is about an actual demon. Regardless, the demon is not the point of the arc, the way the community interacts with Daredevil is.

The fourth issue is the story of a woman who worked with Milla Donovan (Matt’s wife). She attended their wedding and was Milla’s confidant, which is how her story initially connected with Daredevil. Because of her proximity to Milla, when her daughter was taken hostage by the Jester during a bank robbery, Milla calls Matt for help and he saved the girl. Unfortunately, the girl later committed suicide because of her encounter with the demon.

At the end of the fourth issue a man named Lawrence begins to make a scene and unexpectedly Matt steps forward. He’d been a part of the support group the entire time (you can see him in the baseball cap in the picture of the support group above) and was listening to everything. Matt tells them that he is tracking the demon and that’s why he’s there.

This is what I find most fascinating about this story. Matt speaks to the people in the support group honestly and doesn’t try to hide who he is. He doesn’t claim to be Daredevil, but he never denies it. In fact he tells them that they deserve to know the truth. He does all this, despite knowing that there is an FBI surveillance van outside trying to find proof that he is indeed Daredevil. Matt is showing his devotion to and trust in his community by exposing himself. His trust seems to be returned since he manages to eliminate the demon and return to his life without any of the people trying to turn him in.

Bendis knows how to write a story and the art by Alex Maleev accompanies it perfectly, but I think what really stands out here is the coloring. I particularly like the way colorist Dave Stewart colors the flashbacks as people tell their stories. Daredevil is always in bright red, but the rest of the panels tend to be black and white or monochromatic in some way. For example, the use of color in this set of panels really makes Daredevil pop despite how small he is:

Decalogue is an interesting little arc. In some ways it feels like it should be longer—given the title I would have thought ten parts—but what it does give us is more than worth it. It’s slow pace with intricately connected stories that show us the world of Hell’s Kitchen from the eyes of ordinary citizens is the kind of storytelling that I wish more superhero comics would give us. Not everything has to be big and flashy to make an impact and this story proves that.

What do you think about Decalogue? I’d love to discuss them with you in the comments!

2 thoughts on “The Devil Among Us”