This time we start off with the Cherry Blossom BBQ. Although, as we’ll soon see, Akamatsu has some evil plans for Keitaro up his sleeve, for the time being he has finally earned the respect of the women and girls of Hinata House. He has passed his exams and gained entrance into the prestigious Tokyo University. Even Motoko, who’s often been the harshest to Keitaro, goes to him for some advice on passing her university entrance exams. It’s nice, after eight books, to see Akamatsu giving us something a little different. However, Love Hina is definitely a romantic comedy that has leaned way harder on comedy than romance and Keitaro ends up having a building fall on him. While he does display superhuman strength in not dying, he’s not Wolverine and so he has to go to the hospital. Unfortunately, his injury causes him to have to withdraw from his first semester at Tokyo University. So while he and Naru have both gotten in, Keitaro is now at least a semester behind her for graduation. Naru is scouted to be Miss Tokyo U, but as of the end of this book, it didn’t appear to have any effect. I think the anime plays this up more, but we’ll get to the anime in good time.

Keitaro is visited by all the Hinata House girls except Naru. Again, it’s nice to see that they do genuinely care for him and he’s finally starting to feel more comfortable around them. Akamatsu does his best to make it seem that Naru will never arrive, but she shows up after hours. After all the “man up” comments from Naru over the past couple years (in universe time), Keitaro finally declares his love for Naru and she runs out of the room. He’s left bewildered and dejected, as any rational human would be.

We then revisit the topic of Motoko and femininity when her sister visits and tries to take Motoko home to run the family business. Motoko pulls a pretty typical romcom play by telling her sister that she and Keitaro are engaged. Her sister’s hip to the plot and engages in a series of ever-escalating requests for them to prove their engagement. This starts off with kissing and ends with them bathing together. Again, we get the idea that, if Akamatsu isn’t exaggerating too much for comedic effect, that it’s pretty much assumed in Japanese culture that engaged couples are pretty much doing everything. This of course makes sense since they are not a predominantly protestant country, valuing chastity until a wedding night. As when she lost the bet to Keitaro, she tries to act womanly, but fails. Eventually Motoko’s sister tries to get her spirits up by having Motoko defeat her, but she doesn’t exactly make it easy. Eventually Motoko wins via a possessed sword.

After a short section in which Urashima tutors Shinobu, who now also wants to get into Tokyo U, we get a plot about Seta and Haruka. There have been plenty of hints that she and Seta were once an item and I’d always assumed it coincided with when he was tutoring Naru. That would have made her crush on him even more devastating. Instead it turns out that she used to work for Seta on his archeological digs. He proposes to her but she rejects it because she’s essentially second best after his wife died. However, she does give him what’s implied to be one night of passion or at least a great date. This sets the mood for Naru and Keitaro (who tried to get Seta and Haruka together after she rejected the proposal) to talk about Keitaro declaring his love for her. Naru finally admits she also loves him. 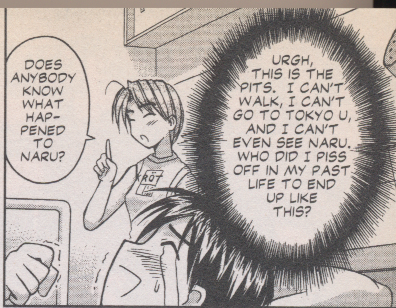 Love Hina Book 9 – What did Keitaro do in a past life?

The Japanese would not be alone in believing in previous lives. But I believe it has been a belief for the East more continuously than than it has been in the modern West. (Since the ancient Western religions were replaced by Christianity) 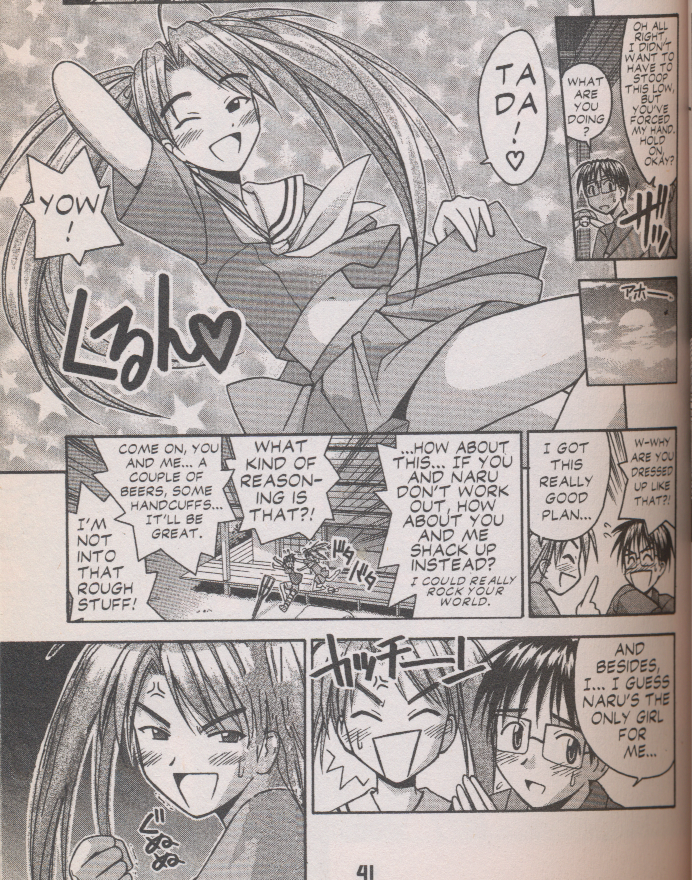 Love Hina Book 9 – Kitsune tries to go after Keitaro (and sober, too)

Kitsune has been making passes at Keitaro since the beginning – both drunkenly and while sober. They’re closer in age and she obviously sees something in him. I’m not sure if this says something about Japanese culture, but I feel like many American writers might have made Keitaro rebound with Kitsune. I know Keitaro has resisted rebound-like advances from Kitsune and Mutsumi before, but I think it would be pretty believable for him to finally declare that it was too much and go out with Kitsune for a little while. He could then realize even more that he had to get with Naru and have to repair the damage of having to date Kitsune. Webcomic Questionable Content definitely had that storyline early on. As an added bonus, Akamatsu makes Naru very jealous when other women show interest in Keitaro, so it would be a good plot for him to try and get her to finally admit her feelings. But I’ll stop now before this paragraph becomes the plot of a fan fiction.

This exchange between Motoko and Kaolla is a little bizarre to me. I know the Japanese eat ice cream. I guess the best way to interpret this is that the Japanese don’t routinely eat dessert as the last course of a dinner meal. Of course, there’s no reason for dessert to be universal, but I would have thought everyone would enjoy something snack-like as a little guilty pleasure at the end of a meal.

As I mentioned before, Love Hina derives quite a bit of comedy from Kistune essentially sexually harassing (and, in some cases, assaulting) Keitaro. It serves both as an example of his non-manliness, but also derives “humor” from something that would be horrific if the genders were reversed. Here Kitsune does it again, but we do end up learning that it’s considered manly for Keitaro to have gotten into Tokyo U. On the one hand it makes sense. Quite a few sociologists have made their career on suggesting that women dig older men because on a subconscious level (as well as sometimes consciously) he’s better able to provide for her and their children. But, if it’s manly to get into Tokyo U, what does that say about the women who get in? Or is it just manly in the sense of the opposite of child-like rather than as the opposite of womanly? It appears this latter idea may be what Kitsune’s getting at. Keitaro’s still a bit girly, but he’s no child. Perhaps even giving her more excuse to treat him as a sexual object. 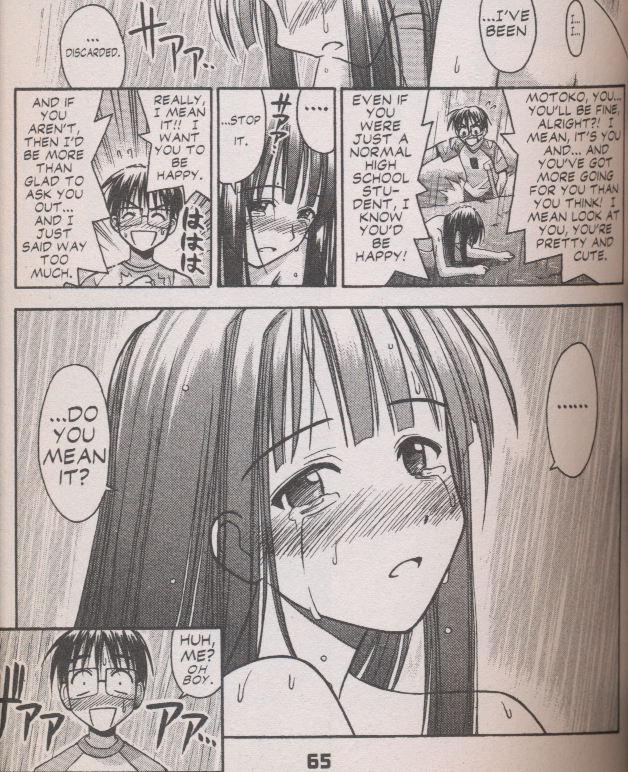 For about the third or fourth time we’ve seen the worth of a woman defined as being pretty and cute. Japan certainly doesn’t have a monopoly on this – you could see the same thing in any American comic. However, given that nearly all the girls/women at Hinata House are overachievers, it’s a shame that Keitaro doesn’t mention her academics or even her dedication to her training. Of course, the entire point is to set up a repeat of Motoko trying (and failing) to be girly, but it’s still slightly disappointing. Also in a repeat of last time, Motoko threatens to commit suicide, but we’ve already covered that before.

Well, join me next time when I wade into uncharted territory – an issue I haven’t read before.