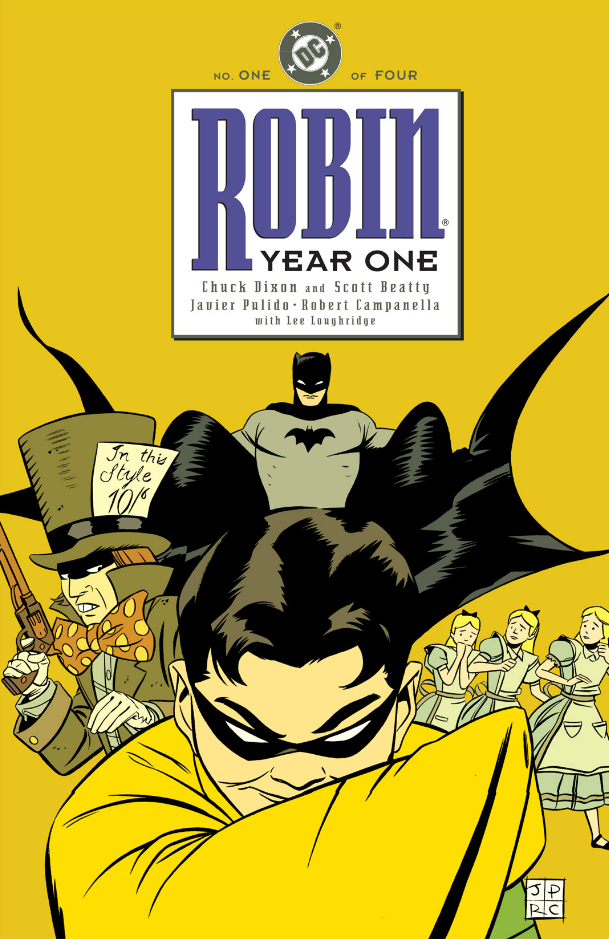 Last weekend Comixology was having a Nightwing 101 sale.  Basically, their editors selected a group of comics they believed was representative of everything you’d need to know about Dick Grayson’s life.  Of course, there’s the caveat that some or all of this might have been altered by the New 52 Reboot and its Five Year Timeline, but it’s still a pretty neat way to structure a sale and give readers a way to explore a character.  I picked up a few different issues that I’ll be reviewing over the next few days, but so far I’ve only read Robin Year One Volume 1.

Batman Year One is one of those seminal books that everyone is supposed to read along with The Killing Joke and Return of the Dark Knight.  I’ve never gotten around to it (although I did see the animated direct-to-video version).  But the idea sounded neat and I know a lot less about Robin than I do about Batman.  The story takes place a little after Dick Grayson has taken the mantle of Robin.  He’s still quite fresh to the job, but the writer doesn’t really waste time with Robin’s origin story.  Just like Batman’s and Spider-Man’s origin stories – this one is well-known enough that they don’t need to retread it.

The story, or at least Volume 1, is narrated by Alfred and I think that’s a very nice touch.  My favorite Alfred has always been the one from Batman: The Animated Series – he loves his “masters” and, although under their employ, he’s often the giver of sage advice.  And he’s quite sarcastic with Bruce and whoever is in the Robin guise, especially when their refusal to take his advice leads to bad consequences.  It’s not a bitter sarcasm, but the sarcasm of a parent dealing with children who think they know better.  There seems to be some of that Alfred within this story.  He is both concerned for Dick being brought into Batman’s life and happy with the effect it’s having on Bruce.  I’m not sure if it started with Tim Drake or if other writers were exploring this concept before, but in the modern times a big part of the exploration of the relationship of Bruce to his boy wonders is the effect they have on him.  The general consensus seems to be that they keep him from spiraling into an emo-death-spiral of despair at being unable to rid Gotham of its menaces.

I also really enjoy the fact that this book looks at Robin’s life outside the Bat Cave.  Comic books are a tough story-telling medium.  Although Marvel is double-shipping a LOT of their titles right now, DC has taken the stance that each of their books will only come out once a month.  So that means a great story like Scott Snyder’s Court of Owls arc can take an entire year to tell.  So, even with five to six Bat-books, there still isn’t enough room to focus on the public personas that Batman and Robin have.  I’ve always enjoyed when Marvel has taken an issue or two to give their main characters a break.  I’ve mentioned it before, but my favorite X-Men issue has them playing a game of baseball.  I enjoyed the 2011 Christmas issue where Wolverine’s kids played hockey.  I’d love to see a lot more of what Bruce and Damian are up to.  So that’s why I REALLY enjoyed how this book focused a bit on Dick’s time at school.  Of course, it leads right into the main plot of the volume, but it was still neat to see how he would comport himself in public when he’s not Robin.  And, reading the synopsis of the other three volumes in this story arc, it seems that the tension between his civilian life and his crime-fighter life will end up being a strong theme of the book.  Again, that’s something that a lot of people have explored – Scott Snyder’s recent run on Detective Comics focused on how being Batman changed Dick as well as what he was able to keep as part of his character despite Gotham’s “intentions”.

The artwork on this book may be divisive.  I definitely enjoyed it.  It’s a mix of modern comic book art and a tribute to the comic book style from the 1940s and 1950s when Dick was first introduced to the comic world.  I also think the clean lines and simplified backgrounds also fit in with the innocence of childhood.  It seems like a child’s comic from the way it’s drawn and Dick is still very innocent.  I don’t know if this will happen or not, but it would certainly be interesting to see if the art style (or even just the color palette) changed as the series went on and Dick had to deal with more gruesome things.

I definitely look forward to reading the rest of this story.

Get it here on Comixology or here on Amazon.