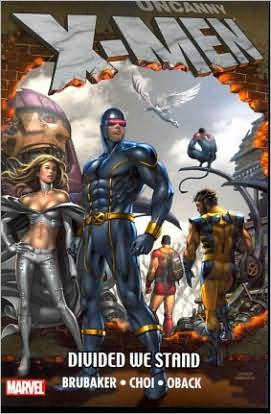 As I did with Amazing Spider-Man’s “Brand New Day”, I’d like to use the purchase of a trade paperback to take a look at a complete story arc. This time I’ll be looking at Uncanny X-Men: Divided We Stand. This story arc takes place in the aftermath of the crazy Messiah CompleX, in which the first post-M-Day mutant was born. At the end of that arc Cyclops proclaims that the X-Men are no more. Given that, there are certain expectations that come from an arc called “Divided We Stand”.

I expected to see the majority of the X-Men trying to figure out how they can keep the team together or going off and doing their own thing. Maybe some fallout with the humans or old enemies of theirs. Instead we get a pair of stories – one follows Scott and Emma and the other follows Kurt, Piotr, and Logan. These are well written stories in their own rights – although I feel that Ed Brubaker’s Cyclops doesn’t sound right to me. The stories just don’t seem to live up to the idea of “Divided We Stand” and just seem like filler issues.

The Scott and Emma story starts off with one of my favorite X-Men story-telling devices – they are off on vacation, just relaxing. This gives us insight into who the characters are outside of battle and it’s traditionally always been been one of my favorite aspects of how writers tackle the X-Men. Of course, being X-Men they don’t vacation in Cancun – they vacation in The Savage Land. Yeah, who wouldn’t want to ride dinosaurs while on vacation? On their way back we find out that a few X-Men who had been sent to San Francisco didn’t meet Angle where they were supposed to. We get an idea that things may be a little strange when Angle suddenly forgets his purpose and seems to love being with the hippies.

Emma and Scott land near the Golden Gate bridge and we learn about the Sleeping Celestial. It really gives a sense of how slowly things move in comic books that this doesn’t become a plot point until the recent relaunch of Uncanny X-Men post-Schism. Emma is able to keep Cyclops and herself from being affected by the vibe that’s turning everyone into hippies and they go off in search of their friends.

The rest of their story not only does not deal with any of the kinds of things you’d expect post-Messiah CompleX (ideas of whether or not to reform the team and how), but it also doesn’t really explore things within the construct Brubaker has created. Except for a panel here and there we don’t get to see how being hippies affects any of X-Men. I would have loved to have even seen Scott and Emma fall under the spell to see how they would have dealt with it. It could have been used to reveal more about how they think. Or it could have just been all kinds of fun. Instead they just try and find the person who’s causing this. We get some glimpses of what’s going on and why, but it doesn’t feel like it really has weight. This story (and the book as a whole) doesn’t even answer the question posed on the back of the book: “Is anyone safe in a world without the Uncanny X-Men?” That would have been something great for Brubaker to explore. It’s where I thought he was going with this. Or imagine what it would look like if Cyclops tried to lead a band of hippie X-Men.

The other story in the book focuses on best buds Wolverine, Nightcrawler, and Colossus. Colossus wants to go back to Russia to visit his parents’ grave. The best thing about this story is that you get a really good feel for how these guys are such good friends. It really helps to underscore how Wolverine must feel now. He has AoA Nightcrawler instead of regular Nightcrawler in his life and Colossus stayed on Utopia post-Schism. So his best friends are no longer with him. Their story is more or less what you’d expect from a teleporter and two bruisers who enjoy drinking going from town to town. There’s lots of brawling and great quips from everyone involved. Something happens in Russia, but I don’t want to spoil it – even if it came out a few years ago.

Really, the Wolverine story is a lot more like what I thought this story arc was going to be – groups of X-Men off on their own now that the team was disbanded. The Hippie story was fun, but felt like a missed opportunity – if that section had been at least 1.5 times as many issues, they could have really taken advantage of having a bunch of X-Men acting like hippies. The Wolverine section was spot-on and it’s the biggest reason I didn’t had the arc. Had I been reading it as it came out, I think I would definitely felt as though they’d wasted a bunch of setup time for a story that didn’t really go as far as it should have.