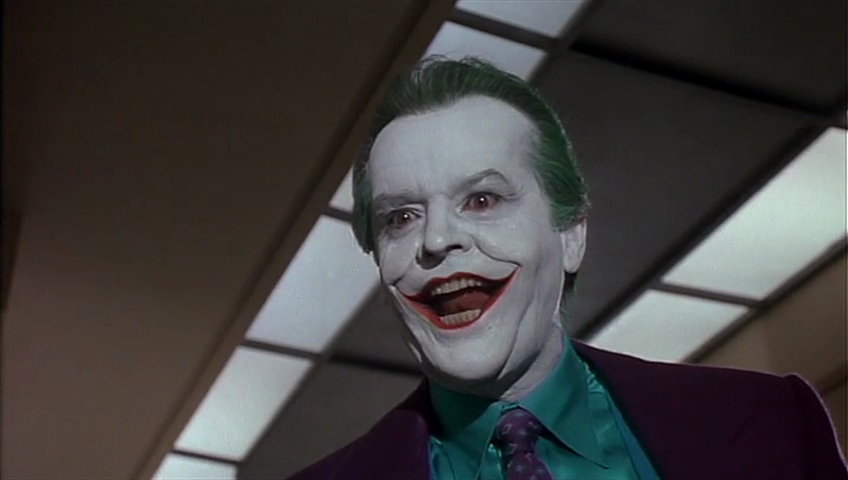 When I was around five or six years old, my aunt gave me Tim Burton’s Batman (1989) as a present.  My parents watched it and decided it was not appropriate for me to watch at that age.  Once I was close enough to 13 that my parents would have let me watch it, I was busy spending my allowance on renting new movies and video games.  So I never saw it until I recently rented it via Netflix to watch on a plane ride.

I thought it was pretty neat that the theme song is the same as the WB cartoon,  obviously the movie came before the cartoon series.  I know am hardly anywhere close to the first person to observe this, but I think it’s so odd that the movie most responsible for bringing Batman back into the pop culture is in such direct opposition to the comic book Batman.  Nothing about Michael Keaton, his mannerisms, or his build says Bruce Wayne, the man who trained his body to become the world’s deadliest ninja.  And his final action in the movie, which I’ll get to shortly, is in conflict with everything we know about Batman.

Gotham in this movie seems to borrow a lot from 1980s NYC.  I’m sure a lot of people thought it was part of the zeitgeist back then with all the crack wars an all that.  In fact, it appears to be the least Burton-esque of all his sets.  I also thought it was a brilliant bit of misdirection that Burton makes us think the first family we see is Bruce Wayne’s family about to be killed to start off the chain of events that creates Batman.

While we’ve never had a definitive back story for Joker, most of us think of the story in The Killing Joke.  (Well, those of us who read comics.  Everyone else probably things of the Heath Ledger non-origin)  In that origin, you feel sorry for Joker.  He’s a victim.  In Tim Burton’s movie, Joker’s already a villain and he’s sent to the factory as part of a setup because he’s been canoodling with the Boss’ wife.  While Jack Nicholson does an amazing job with this Joker, especially the scene where he first sees himself in the mirror, this is a silly Joker that can’t really be taken seriously.

At the same time, however, Tim Burton plays with the idea of Joker existing in response to Batman.  However, unlike the Joker of  The Dark Knight, this Joker isn’t a response to the fact that normal criminals can’t exist in a world with Batman.  Rather, Batman gets press during Joker’s hit so he ups the ante with his Joker toxin.

Overall, it was a silly Batman movie that’s closer in tone to the Adam West Batman than the Christopher Nolan Batman, but the thing that put me off the most is that Batman wants to kill Joker at the end of this movie.  Batman is NOT supposed to kill.  He’s supposed to be above the fray, otherwise he’s little different from those he tussles with.

Days of Future Past from Page to Screen: What Happened to the Women?