Scott Pilgrim Vs The Universe (in Color!)

I read Scott Pilgrim in its original manga-sized, black and white form when it first came out. With the final volume of the color version coming out this year, I thought it would be a great time to revisit the story as well as looking at how the addition of color changes things. I’ll be exploring the story and themes volume by volume. This time, volume 5.

For the most part, everyone’s era of extended adolescence is coming to an end. Some of the blame for this development can be laid upon the shoulders of Stephen Stiles; the longer the band goes without practicing, the more adrift the characters feel. They start looking for other things to bring meaning to life and that includes growing up and realizing the dream of the band is mostly over. Kim Pines decides to move back to her hometown. Even Scott Pilgrim declares he’ll be the best 24 year old ever. His only lacking trait in this volume seems to be his inability to remember the key to his apartment. By the end, his parents have even helped him get his own place. 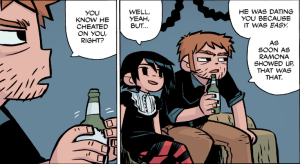 Scott Pilgrim vs The Universe – “You Know He Cheated on You, Right?”

As we’ve seen, Knives has exhibited a lot of growth, but even so she’s been unable to quit Scott Pilgrim. Stephen Stiles delivers the final blow when he tells her that Scott cheated on her. At first she merely blames Ramona as if Scott weren’t a participant in the deception. Eventually, she reveals it to Ramona, putting a rift in her relationship with Scott. She seems to have glommed onto Stephen after that – perhaps she just needs to cling to someone. 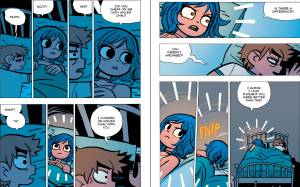 Scott Pilgrim vs The Universe – “Did you cheat on me with Knives Chau?”

As usual, dealing with The Exes dovetails with dealing with the past. At its heart, the Scott Pilgrim series seems to be about the fact that we’re all flawed. It doesn’t excuse our wrong behavior, but it’s worth noting that people can grow. The Twins are against Ramona because she cheated on them both, played them off each other. I’m not sure why this means they should attack Scott – unless it’s simply to cause Ramona pain. However, Scott’s overlapped dating of Knives and Ramona is just too recent to forgive. It’s interesting that when Ramona asks Scott if he cheated on her with Knives, he retorts that he cheated on Knives with Ramona. He actually finds that to be less damning.  Unfortunately, it’s not enough for Ramona and she disappears while Scott’s watching.

The only real part that involves attitudes towards gays involves Young Neil calling his brother Captain Homo. It’s certainly meant to be interpreted as homophobic, and that’s certainly true no matter what, but this is yet another clue for the coming reveal.

What I enjoyed about the Gideon references in this volume was the fact that  because Wallace gets blurry photos of Gideon, Scott doesn’t really know what he looks like. So Scott attacks anyone that could potentially look like Gideon, including his older brother.

The main Gen X/Y reference I happened to catch this time was the Double Dragon logo which was also a foreshadowing of the sibling threat Scott faced this time around.