No Rest for the Weary: Gail Simone’s Red Sonja Vol 2 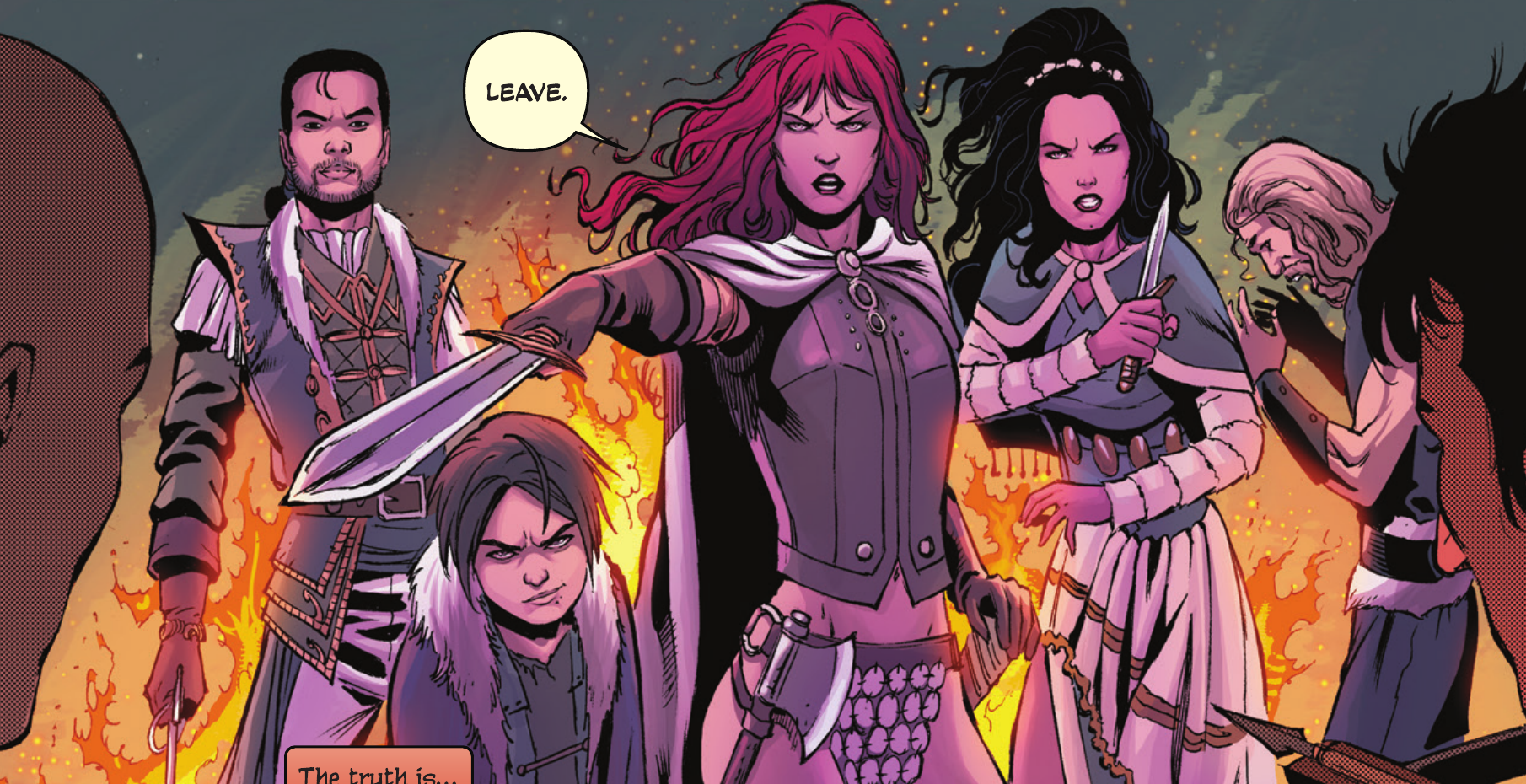 With the second story arc in her Red Sonja run, Gail Simone unifies what could easily be a series of six one-offs by creating a fetch quest. In this case, Sonja is asked by the nearly-dead King of Not-Egypt to find him six gifted people to play key parts in his death party. In order to raise the stakes, the king promises her that he will let his slaves free if she fulfills the request.

Just as before, Simone leans hard into the tropes and proves that tropes are not inherently bad. Red Sonja continues to be a warrior woman who doesn’t quite understand why everyone objects to her stench. She starts off hungry, parched, and horny and is only ever able to quench the first. Sonja can never have enough alcohol and Simone makes a mighty fine brick joke out of Sonja’s inability to get laid during this arc. Besides making a great running gag out of all the reasons she’s denied, I think Simone is also subtly making a commentary on how Red Sonja’s often considered hot stuff that any reader inclined to find ladies hot would want to get with, but in reality might be quite off-putting.

As I mentioned in the look at the first arc (as well as asking her during a Baltimore Comic-Con panel), I wondered how Simone, who has fought hard for less exploitative depictions of women in comics could end up wanting to work on Red Sonja. But if one pays attention during this story arc, Sonja is rarely dressed as scantily within the book as she is on the cover. In fact, the one time she IS dressed like the cover, she is mistaken for a prostitute. While her costumes still rely on the rule of cool, they’re most often quite a bit more practical than the chain mail bikini.

It appears Simone had lots of fun trying to figure out the best way to subvert our expectations with each of the gifted people. Rather than go through each one and unnecessarily spoil things for any readers who haven’t yet read this arc, I’d like to explore two ways in which Simone makes this arc a character study of Red Sonja. The first concerns The Courtesan. At first blush, it appears that this woman cannot possibly have anything in common with Red Sonja. She is pretty, smells nice, uses her body for sex, and is a prisoner of sorts to the captain who owns the brothel. Simone, however, revisits her favorite topic of sisterhood and uses it to force Red Sonja to confront her stereotypes. First we learn that the reason The Courtesan does not want to leave with Red Sonja is that she wishes to unionize the sex workers to try and get some leverage on the captain. Then we learn that she is almost actually a sister to Red Sonja as they grew up in neighboring villages. The Courtesan is able to hold her own in a fight because she was orphaned at a young age. Finally, she is a self-made woman, just like Red Sonja. She just happened to choose sex work as her way out of a bad situation. When she puts makeup and a nice dress on Red Sonja, she even has somewhat of a crisis of character as she realizes that The Courtesan doesn’t fit as neatly into a box as she’d thought. It makes her question all sorts of assumptions about herself.

Simone also has us learn a bit more about Red Sonja’s psyche when she visits the immense temple-fort to liberate The Stargazer. We’ve seen Red Sonja cavalierly face off all sorts of dangerous foes. We’ve rarely seen her panic – even when the odds are not in her favor she decides to go all Spartan and fight until the death. Yet, as she enters the temple, she is truly scared for the first time since she and Dark Annisia escaped from the fighting pits. Through Red Sonja’s feelings we’re reminded that the exact reason that the cathedrals in Europe are so massive is that they were supposed to leave the lay person in shock at how small they were in comparison. If this was God’s house, they were but motes of dust in the wind. By comparison, Sonja’s village just had a religious hut. She is scared not only by the nature of the temple, but also because of how religion can have total control over people.

With this volume Simone continues her seemingly impossible idea: a pulp hero, getting in pulp situations, making the reader laugh, but still getting across some deep issues when the reader stops to think about what he or she has read.

One thought on “No Rest for the Weary: Gail Simone’s Red Sonja Vol 2”